TCFA dates for the New Year

The Traditional Catholic Family Alliance meets in Reading and at St Edmunds College Ware (and sometimes elsewhere). I've just had an email about the latter: their dates for the New Year are (all Saturdays):

The days begin with Traditional Sung Mass at 11am in the splendid Pugin chapel at the school, and continue with talks and catechesis for adults and children of all ages. All are welcome; there is no fee. If anyone would like to know more, please contact me.
Posted by Joseph Shaw at 7:08 pm No comments: 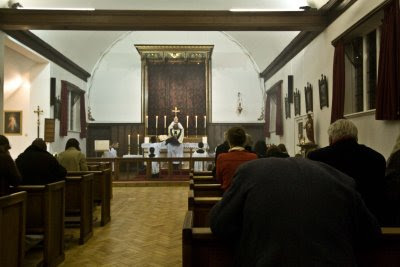 Friday 12th December saw the first Missa Cantata in SS Gregory & Augustine to be served by parishoners and accompanied by the Parish Choir. Fr John Saward preached on his recent visit to Lourdes.

The church is undergoing restoration. The floor has been sanded, and the wooden pannelling on the East wall has been prepared for painting. The curtain behind the altar is new; eventually it will be used for the church's 'Lenten array', but for the time being it hides the unfinished work on that part of the wall.
Posted by Joseph Shaw at 1:14 pm No comments:

Press release from the LMS on Merton

The following is a statement from Mr Paul Beardsmore, Secretary of the Latin Mass Society: 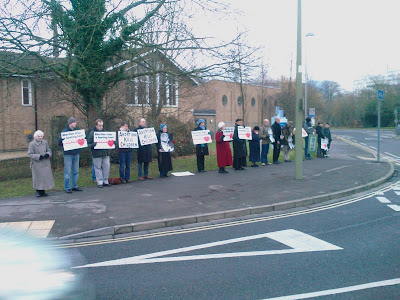 This took place as usual last Saturday and was well attended despite the cold weather. We prayed the Rosary by the entrance to the John Radcliffe Hospital, the only place in Oxford where abortions take place.

Join us at the next ones! They take place on the last Saturday of each month - not December, but from 3pm to 4pm

January 31st
and
February 28th
The Blessed Sacrament is exposed in St Anthony of Padua and the witness ends with a short Benediction. The Rosary is led by Fr John Saward.
Posted by Joseph Shaw at 5:49 am No comments: