Rigid Catholics: a talk in London 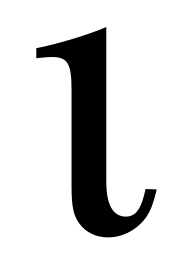 And I ask myself: Why so much rigidity? Dig, dig, this rigidity always hides something, insecurity or even something else. Rigidity is defensive. True love is not rigid.

I shall be giving a talk, 'Why do they call you rigid?', in London on Friday.

It is part of the Iota Unum series, and will take place at

in the basement of Our Lady of the Assumption, Warwick Street, on Friday 26th (Easter Friday).

Access via the basement steps from Golden Square (map).

£5 on the door; drinks provided.

I shall be discussing the development of the notion of psychological rigidity from the 1930s, the way the theory has been used, problems with the theory, its relationship with the Catholic faith, and how one can respond when accused of rigidity.

I have processed my photographs from the Easter Triduum at St Mary Moorfields in London, which were organised by the Latin Mass Society. Here are some highlights; click through to find the whole set. 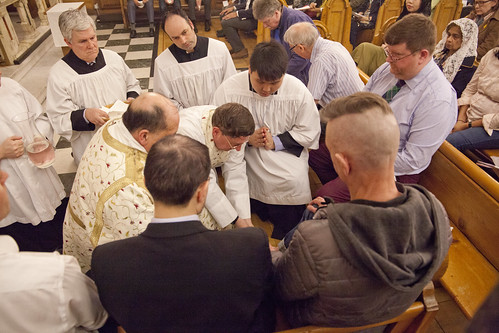 Maundy Thursday is always well attended. The church was packed. 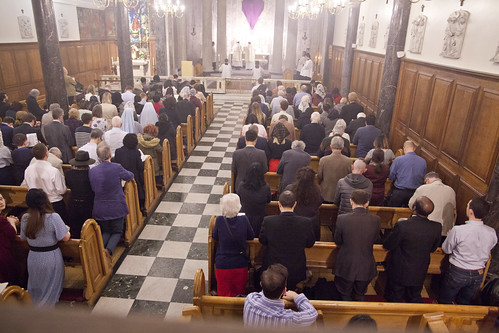 Prayer Vigil for Life with the Traditional Dominican Rite, 10th May 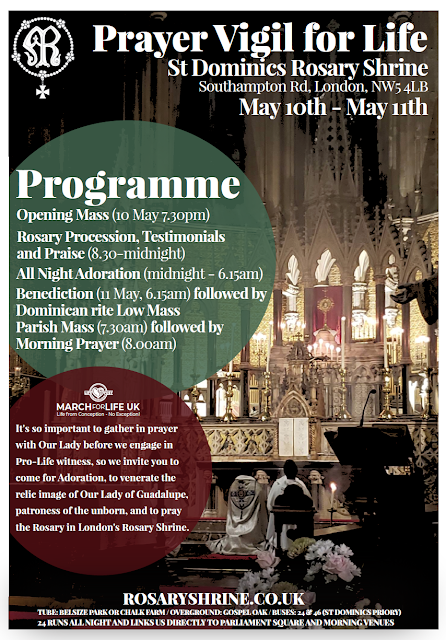 I'm putting this back to the top of my blog since there is now a petition open in support of this priest. Sadly, his bishop's response to the investigation has been to remove the priest from the parish, and his future is now uncertain.

A recent LifeSite article by me. It begins:


A curious letter is doing the rounds on social media. It is from a parishioner of a Catholic church in Tasmania, Australia, in the small diocese of Hobart, addressed to the young, recently arrived parish priest. Maureen—for that is her name—notes that people have spat at Fr. Nicholas Rynne, and been unwelcoming to him. Far from condemning this behavior, however, she endorses it. Her criticisms are that he has started a Traditional Latin Sunday Mass in the parish, in addition to the two Ordinary Form celebrations, and that he wears clerical dress (read full letter below).
It is not that she is obliged to attend this newly established Mass, or that clerical dress harms her in some direct way—how could it?. Rather, they represent the old days, the old beliefs and practices of the Church, and these fill her with rage. She claims to remember these, which suggests she is of the older generation.
It is possible that Maureen suffered personally from priests of the pre-1965 era (when Mass was still always in Latin): she mentions clerical sex abuse as an issue, although it is evident that translating Mass into the vernacular was not enough to solve that problem. In any case, bad experiences from that era can hardly be blamed on a priest who must be young enough to be her son, if not her grandson. And she can hardly imagine this young man is singlehandedly going to bring back the schools, convents, orphanages and other institutions of the distant past, simply by wearing a clerical collar. No, her reaction is irrational. By the same token, it is doubtless sincere.
Continue reading.

What were Catholic schools like in the Bad Old Days?

A friend of mine found a school Religious Instruction curriculum dating from ther 1930s or '40s in the Diocese Clifton, and I've written a LifeSiteNews article about it.


It is impossible to tell from this document how many hours were devoted to Religious Instruction, and how detailed the instruction was. Nevertheless, it is clear that the pupils of non-elite, parochial schools were expected to be able, by the end of their courses, to have some idea of the sweep of history from Abraham to the Russian Revolution, to be able to discuss the Church’s social teaching, to have read the latest papal encyclicals, and — for the more advanced pupils — to be able to sing the complex Gregorian Chant ‘propers’ for major feasts.
The typical pupil at the eve of departing a Catholic school in England today would probably not know what Gregorian Chant is, and is extremely unlikely ever to have read a papal encyclical. Religious instruction in Catholic schools has, in fact, improved somewhat in recent years, but it is narrowly focused on doctrine, with a particularly shocking neglect of Church history. The stereotype of the past is actually more true of the present.
Read the whole thing there. 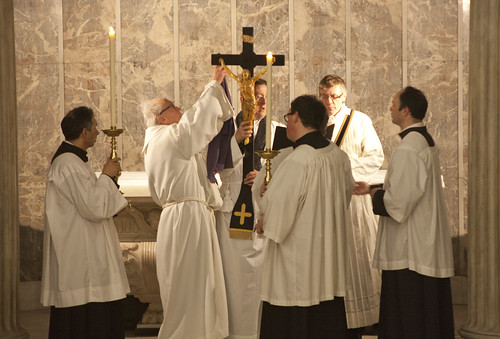 This Holy Week in the heart of London, a rare opportunity to experience one of the oldest services in the Catholic Church along with a feast of chant and polyphony including a Sacred Music World Premiere.

Beginning on ‘Spy Wednesday’ with the ancient office of Tenebrae, The Latin Mass Society will be celebrating Holy Week with a wealth of traditional Latin liturgy at St. Mary Moorfields in the heart of the City of London. This year’s Triduum celebration will be directed by the Latin Mass Society Director of Music for London, Matthew Schellhorn with his group ‘Cantus Magnus.’

Since his appointment as Director of Music, Matthew Schellhorn has involved more professional musicians, both singers, organists and composers, in the work of the Latin Mass Society.

In October 2018, Cantus Magnus gave the World Premiere of new commissions Missa Rex in Æternum and Ego mater along with UK Premieres of several other works by American composer Peter Kwasniewski (b. 1971).

The Latin Mass Society is pleased to announce that the renowned composer and theologian Peter Kwasniewski has been commissioned to write for Cantus Magnus, and his Lamentations of Jeremiah will be sung at the daily Tenebrae during the Sacred Triduum.

This new work, structured in three parts for each day, will allow the entire liturgical text to be sung by incorporating the original chant for the Lamentation narrative, preceded by polyphonic introductions and concluding with a haunting meditation on the text, ‘Jerusalem, Jerusalem, convertere ad Dominum Deum tuum’ (‘Jerusalem, Jerusalem, return unto the Lord thy God’).

Read more »
Posted by Joseph Shaw at 4:08 pm No comments:

Mass for this year's Ember Saturday pilgrimage to the restored Shrine of Our Lady of Caversham was celebrated by Fr Seth Phipps FSSP, and accompanied with chant and polyphony provided by the Schola Abelis of Oxford and the Newman Consort. 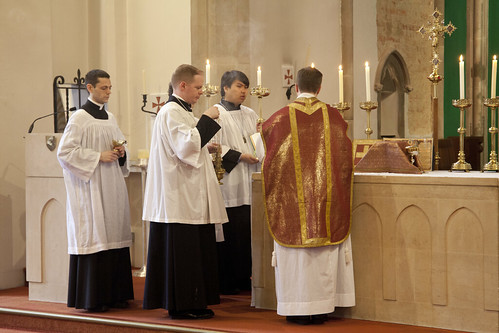 We had the full set of prophecies, which make the Ember Saturdays like little Easter Vigils. 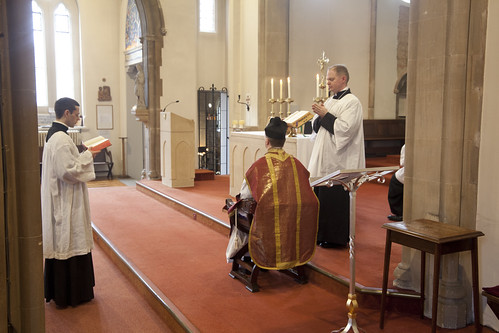 Read more »
Posted by Joseph Shaw at 2:54 pm No comments:

Sponsorship scheme for embroidery training at the Royal School of Needlework

From the Latin Mass Society

The Guild of St Clare is launching a brand-new and very exciting initiative: the chance to study for the Certificate course at the Royal School of Needlework (RSN) at a subsidised rate of approximately 50%. The RSN Certificate Course is intended as a part-time course for keen amateurs and can readily be fitted around existing work and family commitments. It enables students to develop solid skills and become part of a long tradition of maintaining the highest standards in hand embroidery. More information about the course can be seen on the RSN website here.

Part of the mission of the Guild of St Clare is the teaching of skills essential to our work. We hope that in sponsoring places on the RSN Certificate Course we will be helping enthusiasts to gain the solid skills needed to repair, maintain, and create beautiful vestments and altar furnishings. Applicants should be able to demonstrate an enthusiasm for and commitment to hand embroidery and the restoration and creation of vestments. Further details about the sponsorship and how to apply can be found here.

Posted by Joseph Shaw at 2:29 pm No comments: 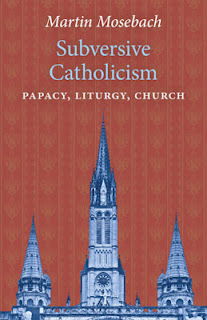 Angelico Press has brought out a new book, a collection of essays, by Martin Mosebach, author of the excellent book The Heresy of Formlessness.

Amazon.co.uk has it here.

I was asked to write a blurb for it, here it is in full.

Martin Mosebach has once more demonstrated his ability to provide provocative insights into the condition of modern Catholicism in this collection of essays. He notes the tension between the liturgical principle, found in East and West, that the rites be "fear-inspiring", and the modern worshipper who "relaxes in an armchair waiting for [God] to arrive". He suggests that the needs of the ordinary believer are satisfied, if at all, in the kitsch products of Lourdes gift-shops, while elite Catholicism offers him an empty aesthetic puritanism. He suggests that the replacement of the monarch with the people, as the holder of sovereignty, makes for fiscal profligacy. He explores the parallel between the prayer wheels of oriental religions with the church bells of European Christianity. These essays are a tonic to our deep-rutted discourse on liturgy, spirituality, and religious sociology, refreshing, challenging, and setting us on new paths of thought.

Should the Pope apologise to Mexico?

A recent article of mine on LifeSite. It begins:


It has been reported that the newly installed President of Mexico, Andres Manuel Lopez Obrador, has called on King Felipe VI of Spain and Pope Francis to apologize for the treatment of the native peoples of Mexico during and after its conquest in the 16th century. The proposal has already been rejected by the Spanish Government.
President Obrador is often viewed as a populist, and this demand certainly has the hallmarks of a publicity stunt. In a country ravaged by drugs cartels and corruption, which Obrador was elected, like all Mexican presidents, to oppose, it is very convenient to fix national attention on the crimes of five centuries ago, committed by institutions today represented by people thousands of miles away.
This is not to suggest that there were no wrongs committed by Spanish Catholics during the period of the Conquest, or that the right of the Spanish crown to conquer the area in the first place is straightforwardly correct. These are complex issues.
But demanding apologies does little to clarify these issues or to promote reconciliation. If they have any impact at all, such gestures tend to reinforce one stereotype at the expense of another, when a more nuanced view is necessary for a just historical appraisal. Part of that appraisal would be an acknowledgment that Europeans did not import the institution of slavery into some kind of ideal, peaceful community, but found in central America a society characterized by slavery, exploitation, and human sacrifice on an industrial scale. Another would be that at key historical junctures the Church, and indeed the Spanish crown, worked to improve the lot of enslaved peoples, even at the risk of provoking civil war with slave-owners.
Continue reading.