My latest on LifeSiteNews.
Contemplating the problems in the Church today, I feel like the countryman in the joke about the stranger asking for directions. 'If I were going there,' he replies, 'I wouldn't start from here.'
I wouldn't start from a situation in which, because of fifty years of bad or absent catechesis, some people walk out of church if they hear a sermon which talks about moral issues. I wouldn't start from a situation in which, because of fifty years of poor and occasionally sacrilegious liturgy, some people walk out because they see anything redolent of reverence or tradition.
We are where we are. How could we begin to make things better, without making things too much worse in the short term? Bearing in mind that if you make things too much worse in the short term, you lose your chance to persist in the experiment for the long term.
Here are a couple of ideas. If implemented, they would drive some people out: but any policy will do that, including the policy of no policy, just leaving things alone. The hope is that with the right ideas, a counter-trend of growth might be established.
------------------------------------
I have now written short reviews here of both of Professor Stephen Bullivant’s books: one on a recent survey of lapsed Catholics for the Diocese of Portsmouth in England, the other an in-depth discussion of the sociology of Catholics leaving the Church. These form the background to my consideration, today, of what the Church can do to stem the tide of lapsation, which continues, notwithstanding Catholic immigration into both the U.K. and the USA, which flatters the overall numbers.
Prof. Bullivant asked the lapsed Catholics who completed the Portsmouth survey the simple question: “Can you imagine yourself returning to the Church? If so, what specific things might the Church do to help towards this?”
Unsurprisingly, respondents who thought their return was conceivable proffered conflicting advice. For some, the Church was too traditional, for others too liberal. For some, Masses were not family-friendly; for others, they were too “family focused.” And so it goes on.

Carry on reading.
Support the Latin Mass Society
Posted by Joseph Shaw at 10:54 am No comments: 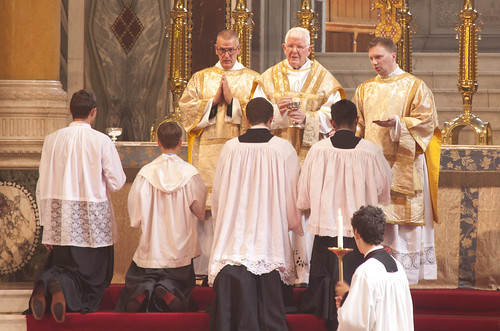 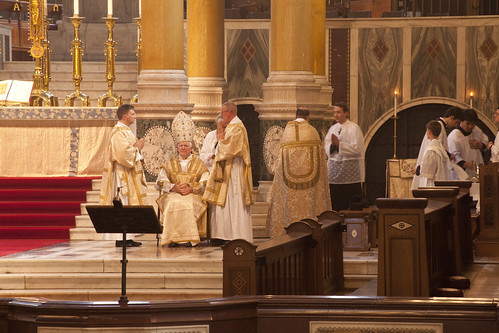 Read more »
Posted by Joseph Shaw at 5:49 pm No comments: 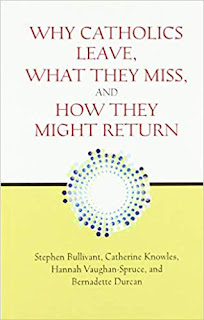 Prof Bullivant on What Went Wrong after Vatican II

I'm going to be writing more about Prof Bullivant's new book, Mass Exodus, which examines the catastrophic decline of Catholic affiliation and practice since the Second Vatican Council, from a sociological point of view.

Here is a piece I have written for LifeSiteNews.


In a newly published book, Mass Exodus: Catholic Disaffiliation in Britain and America Since Vatican II, Professor Stephen Bullivant has explored in detail what went wrong with the Church after the Second Vatican Council, from the point of view of the sociology of religion. The sociological, as opposed to the supernatural, perspective has its limitations, but we should hear what it has to say.
I want to explore just one aspect of Bullivant’s argument (I heartily recommend the book for those interested in more). He introduces readers to the well-established theory of the “social network effect” in sustaining a world view. Simply put, if all your neighbors are Catholics, it is easier to remain a Catholic yourself. If you meet fellow worshipers from your parish in your workplace, in local shops, and in your leisure pursuits, if you read Catholic news sources, and if you are surrounded by Catholic devotional statues and holy pictures, the Catholic worldview will begin to seem not just one option among many, but the obvious way to look at things. Doubts can be answered or ignored. Going to church is just what everyone does. Examples of personal holiness and self-sacrifice for the Faith are easy to witness and to give.
Carry on reading.


Support the Latin Mass Society
Posted by Joseph Shaw at 10:37 am No comments:

For details and booking see the LMS website here. 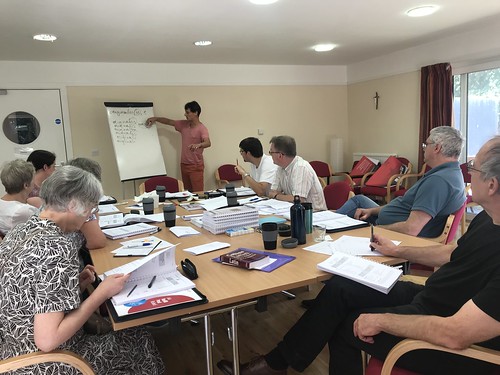 The Latin Mass Society’s Residential Latin Course for adults is an intensive course, taught by two experienced tutors, focusing on the Latin of the liturgy.

It is ideal for priests and seminarians wishing to improve their Latin, and all clerics and seminarians (and those about to enter seminary) enjoy a 50% discount on the course fees, which are extremely low anyway.

Read more »
Posted by Joseph Shaw at 5:21 pm No comments:

The Dominican Rite in Cambridge 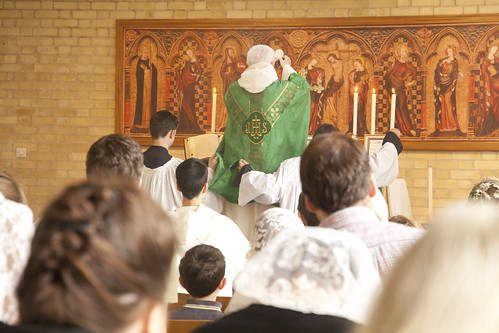 On Sunday, a First Holy Communion took me to Cambridge Blackfriars, a place I have not visited before. The Dominican priory churches in Oxford, London, and Leicester, where I have attended Mass, are large and impressive neo-gothic buildings; for various reasons the Cambridge Blackfriars is very modest. The chapel was, I am told, originally intended as a lecture-room, but plans for a chapel elsewhere were shelved for various reasons.

Last night Bishop Philip Egan ordained four members of the Franciscan community based in Gosport, in his cathedral in Portsmouth: St John's. I was there. 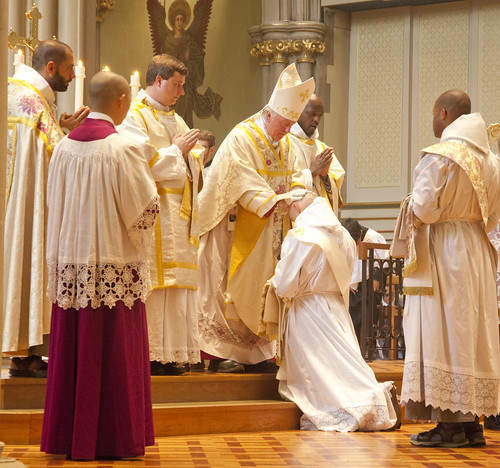 The community at Gosport is called the Family of Mary Immaculate and St Francis. This is an institute of diocesan right established by Bishop Egan, and the superior is Fr Serafino Lanzetta. At their parish in Gosport, which comprises St Mary's and St Columba's churches, they celebrate both Forms of the Roman Rite. The ordinations took place in the older Rite. The new priests are Fr Philomeno and Fr Rosario, who will be familiar to readers who have attended the LMS Walsingham Pilgrimage, and Fr Faustino and Fr Michele. 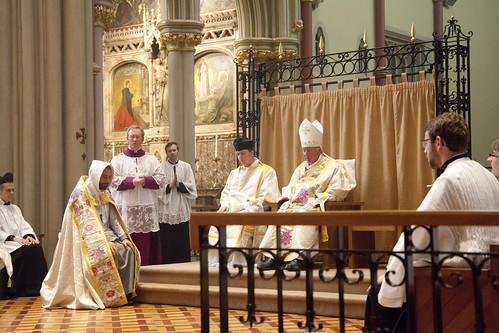