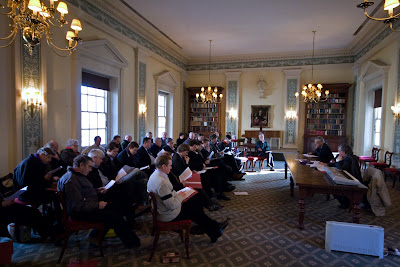 On Saturday 30th January I chaired an LMS-sponsored meeting of directors of chant scholas and other interested parties in St Wilfrid's Hall at the London Oratory to discuss the promotion of Gregorian Chant, and launch a new organisation: the Gregorian Chant Network.

This meeting was a long time in preparation. I have been discussing ways to promote chant with a number of people for about a year, and gathering names and contact details.

One thing I am particularly proud of is getting a pretty definitive list of the amateur groups singing regularly at the Traditional Mass: something the Latin Mass Society has never had before, and which is going to be extremely useful. However, the meeting was by no means limited to 'LMS people'. It was addressed by Colin Mawby, the well-known composer who was Director of Music at Westminster Cathedral in the 1960s, and attended by a number of people connected with the Association for Latin Liturgy and the Schola Gregoriana of Cambridge, and representatives from Una Voce Scotland, the LMS's Scottish equivalent.

The Gregorian Chant Network has two functions: to link chant scholas to each other, for mutual support, and to organise training events. The training events will be coordinated with the existing groups to meet their needs, but are also intended to draw more people into the chant.

The Latin Mass Society supports this project because promoting Gregorian Chant is one of its charitable objects. It is also supported by the Schola Gregoriana of Cambridge, which is the biggest existing group promoting the chant and organising training events, and Una Voce Scotland, and the Association for Latin Liturgy. Nick Gale, the Director of Music at St George's Cathedral in Southwark, is also a keen supporter of the initiative, and will be directing our first training event.

The coming together of the LMS, the ALL, the Schola Gregoriana, Una Voce Scotland, many of the most prominent people in the Chant world in the UK, such as Colin Mawby, Nick Gale, and Jeremy de Satgé, and more than twenty chant scholas from all over England, Wales, and Scotland, to launch a new organisation, is a truly significant event. The enthusiasm of all the participants was very encouraging: everyone recognises the need for an organisation of this kind, and has undertaken to do what they can to promote it.

The meeting itself met our first objective: to put chant people in touch with each other, and give them moral and practical support. Colin Mawby led a practical session on conducting the chant (on Gloria TV here) which was fascinating and also of great practical usefulness to the many chant directors present.

The second objective, of chant training, we aim to accomplish by both weekend residential events and one-day workshops in strategic locations. Our first event is already being advertised: it is Nick Gale's course at the Oratory School, 9-11th April (Low Sunday).

Fr Ray Blake, whose Chant director was at the meeting, has already spotted the GCN website; it is now ready to be publicised more widely. It already has a good selection of chant resources, to which we plan to add as time goes on. Please spread the word!
Posted by Joseph Shaw at 2:00 pm