Was the loss of the Papal States a good thing? Reply to Weigel

George Weigel, the well-known biographer of Pope John-Paul II who in many ways encapsulates the 'neo-conservative' position in the Catholic debate, writes that the loss of the Papal States in 1870 was a good thing. This is a widely held view, but it is in serious need of re-examination.


It is worth recalling how the Papal States worked. The Pope was the temporal ruler of a section of central Italy; the precise dimensions varied but he had been the de facto ruler of a serious buffer-zone around Rome since he took that responsibility from otherwise preoccupied Byzantine Emperors in the 6th Century. So this is not some late Medieval aberration, but something almost inseparable from the notion of the Papacy since shortly after the Church emerged from the catacombs. The states were never in a position to defend themselves against the great European powers, but were established as a neutral zone protected from aggressors by friendly powers, usually the French or the Holy Roman Empire. In the 19th Century they came under attack by fanatical anti-clerical nationalists, but the attempts by Garibaldi to provoke a popular uprising against Papal authority (which would have provided the Piedmontese with an excuse to invade 'to restore order') fell flat thanks to the popularity of the Pope and the energetic response of Pius IX's small armed forces, the Roman militia and the specially recruited international Papal Zouaves. So in the end the Piedmontese conquered the states without the smallest fig-leaf of justification, when France was distracted by the Franco-Prussian war.

Wiegel says: "Pio Nono ordered his own troops to fire one volley, “for honor’s sake” — to emphasize that Italy was acquiring Rome by force and not consent." Yes, that's right: but this in the context 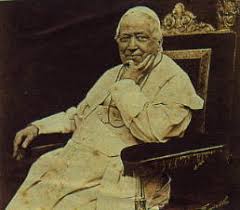 of a campaign of shelling by the Italian forces and the repulsion of Italian troops from Papal positions. It also came after a decade of fighting, which was again far from token. Weigal is trying to re-write history, much to the discredit of the Pope's heroic defenders, many of whom paid for the Pope's freedom with their lives. (For a full account, see Charles Coulombe's book, 'The Pope's Legion'.)

Why does he think the loss of the Papal States was a good thing, when countless Popes (who were, after all, on the ground at the time) made their preservation the keystone of their diplomacy? Weigel talks of the considerable achievements of Pope Leo XIII, and without further argument asserts:

"None of this would have been possible if Leo had been stuck managing a minor European state in the middle of the Italian peninsula and trying to reconcile his evangelical functions as Successor of Peter with the requirements of daily statecraft."

Really, George? This is a truly staggering claim. What about all the theological achievements of earlier popes? Every single one of them, in fact, since the 6th C. Perhaps they delegated the temporal responsibilities of the Papal States, like sensible people. Does Weigal think Leo XIII would not have done the same? (It may be worth pointing out the serious worries which later popes have had in relation to the tiny enclave they currently control: remember the Vatican Bank scandal, the campaign to oust the Vatican from the UN, the battle over diplomatic relations with the People's Republic of China, etc. etc..)

But the claim is revealed as even more bizarre when one reflects what was actually going on, in terms of theological achievements led by the Pope, in 1870. Has Weigel heard of the First Vatican Council? This was in session at the very moment that the Papal States finally fell. It wasn't a coincidence: Italian anti-clericals, like anti-clericals all over the world, were enraged by the declaration of Papal Infallibility, and they wanted to bring the Council to an end by force. The First Vatican Council therefore remained unfinished, and it was impossible in the decades to follow to convoke another.

The Popes knew that if they lost the Papal States they would lose their freedom of action. The disastrous termination of the First Vatican Council is one illustration, another is the famous matter of the Popes' attitude to Fascism and Nazi genocide. Unless Weigel has been asleep for twenty years, he will have noticed that the alleged complicity of Pius XI with Mussolini and the alleged silence of Pius XII about the Holocaust were the biggest sticks used to beat the Church until the clerical sex abuse issue took over. The claims routinely made by the Church's enemies on these topics are grossly exaggerated if not completely false, but the fact remains that it was extremely difficult for Pius XI and Pius XII to proclaim the Gospel to the needs of the time in the middle of a Fascist state, let alone when the Nazis occupied Rome directly later in the war. The lack of a proper Papal State was not, for them, a blessed release from boring temporal duties, but a serious handicap in performing their spiritual tasks. Pius XI negotiated the tiny Vatican City State, which helped: the notion of German secret police having direct authority over St Peter's Basilica and the Papal bedchamber doesn't bear thinking about. But having a proper state would have transformed the situation.

Remember, Pius XII wanted to help Jews and others fleeing from the Nazis and found room for them in every nook and cranny of Castel Gandolfo, his extra-territorial summer residence. His own apartment there was turned into a maternity ward. Refugees were sleeping in the corridors and on the stairs. This work of mercy, however, was severely curtailed by the physical limitations of the Vatican State, and many other refugees had to be housed, much more dangerously, in religious institutions of various kinds in occupied Rome. What part of this, Mr Weigel, shows the great advantage of not having to worry about the Papal States?

(Pictures: Papal Zouaves; Bl. Pius IX; a famous photograph used to associate Pius XII with Hitler. It actually shows Eugenio Pacelli, before his election as Pope when he was Papal Nuncio in Germany, leaving a state function during the Weimar Republic. Although the soldiers are indeed wearing German uniforms, the Nazis had not yet come to power.)
Posted by Joseph Shaw at 9:23 am