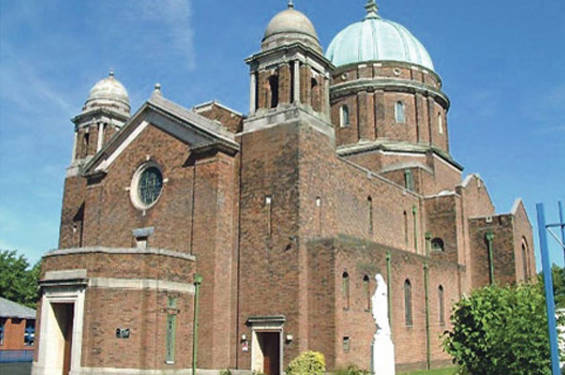 This is a tremendously exciting develpment: the (new) Bishop of Shrewsbury, Bishop Mark Davies, is in talks with the Institute of Christ the King Sovereign Priest with a view to the Institute taking over the Church of SS Peter & Paul, New Brighton, in the Wirral. This is a famous church which has been closed since 2008, and needs a good deal of tender loving care to flourish again. It sounds as though the Institute could solve a problem for the diocese in preserving its architectural heritage, at the same time as bringing a really exciting new apostolate to the Catholics of the region.

You can see the BBC report here; on examination everything in that report comes from the diocese's press release, so you might as well get the information directly from its source. Here it is.

Press Release from the Diocese of Shrewsbury

The Rt. Rev Mark Davies, the Roman Catholic Bishop of Shrewsbury , has entered into exploratory negotiations with the Institute of Christ the King Sovereign Priest about the possibility of the religious order establishing a community of priests at the Church of Ss Peter and Paul, New Brighton .

The intention is to reopen the main body of the church, which was closed for worship in August 2008, by conferring on the Institute the specific mission of fostering Eucharistic adoration. It is hoped that the Institute will work with local Catholics for the restoration and reopening of the building.

Priests of the Institute of Christ the King celebrate Mass in the Extraordinary Form of the Roman Rite (sometimes known as the Tridentine rite, the Traditional Latin Mass or Old Latin Mass) according to the liturgical books promulgated in 1962 by Blessed Pope John XXIII. Bishop Davies will also be considering pastoral provision for the ordinary form of the Mass in English.

After Easter, Monsignor Gilles Wach, the French founder and superior general of the Institute, will visit the church for the first time and will hold direct talks with the bishop. If negotiations are fruitful Ss Peter and Paul will be the first Catholic church in Britain to be run by the Institute.

Since Bishop Davies was first approached by the Institute last year, he has been consulting with the Holy See, his brother northern Catholic bishops, the Patrimony Committee of the Catholic Bishops’ Conference of England and Wales , and English Heritage about the future of the Church of Ss Peter and Paul.

Bishop Davies said: “I welcome the interest shown by the Institute of Christ the King in establishing a new foundation in the Diocese and working for the restoration of the Church of Ss Peter and Paul, New Brighton . I look forward to exploring the practicalities of such a foundation providing Mass for the faithful attached to the Extraordinary Form and the possibility of the church becoming a centre for the adoration of the Blessed Sacrament in which all can share. ”

Canon William Hudson, a spokesman for the Institute of Christ the King, said: “We are in the process of discussing this with Bishop Davies. It is a very serious proposition and while there are a number of issues that need to be addressed - notably financial - we are sure that the faithful will be just as generous as when the church was built. Our order has considerable experience in re-opening churches in very similar circumstances to Ss Peter and Paul. I am confident that with the guidance of the bishop, a solution can be found to the benefit of the Catholic community at large.”

Please contact Simon Caldwell, communications officer for the Diocese of Shrewsbury, on 07708 119554 or at gabrielnews@btinternet.com.

Photos of Bishop Davies are available at:

The Rt Rev. Mark Davies was installed as Bishop of Shrewsbury on 1st October 2010 after he was ordained coadjutor bishop of the diocese on 22nd February that year by his predecessor, the Rt Rev. Brian Noble, the Bishop Emeritus of Shrewsbury .

The Diocese of Shrewsbury covers the parts of Merseyside south of the River Mersey, the southern parts of Greater Manchester, parts of Derbyshire, almost all of the county of Cheshire and all of Shropshire .

The Church of Ss Peter and Paul is a cruciform church with a green dome, built in the Renaissance-style and opened for use in 1935. It towers above New Brighton and the Bay of Liverpool on a sandstone outcrop and can be viewed from as far away as Llandudno in North Wales . It is a Grade II listed building. The church was closed in August 2008 amid rising repair and maintenance costs. After consultations with local Catholics, Bishop Davies announced its partial reopening for a weekly weekday Mass in the Day Chapel from 4th March 2011. The main body of the church cannot be reopened for public use without significant investment and expenditure on repairs.

The Institute of Christ the King Sovereign Priest is a society of apostolic life of pontifical right, with a strong emphasis on missionary work, mainly through running parishes and schools. It was founded by Monsignor Wach and Father Phillipe Mora in Gabon , Africa, in 1990 and has its headquarters in Florence , Italy . The order has about 70 priests working in 12 countries and is training about 80 more, including two English seminarians, at its seminary in Florence . In 2004 a community of sisters was founded to aid the priests in their mission. The order draws its spirituality from the inspiration of St Benedict, St Francis de Sales and St Thomas Aquinas. It has a track record of restoring churches, recently reopening two in the United States and one in Belgium .

The Extraordinary Form of the Roman Rite, or the Traditional Latin Mass, was first codified at the Council of Trent under Pope St Pius V in the 1560s and was last modified by Blessed Pope John XXIII in 1962. It is celebrated in Latin with the priest leading the faithful in facing east. Its use was suppressed during the liturgical reforms that followed the Second Vatican Council of the 1960s in favour of the new rite, or Ordinary Form, of the Mass in the vernacular with the priest facing the congregation. Then in 2007 Pope Benedict XVI released Summorum Pontificum, a document issued “on his own initiative”, permitting the rite to be used wherever a “stable group” requests it. In Shrewsbury diocese Mass in the Extraordinary Form is celebrated each week in Sacred Heart Church , Moreton, on the Wirral, by a visiting priest from the Institute of Christ the King.