Anglicanism as a car crash

An interesting post from the Anglo-Catholic blog: those coming over to Rome through the Ordinariate are like the survivors of a car crash.

It reminds me of Cardinal Newman's quotation of psalm 124, in a letter to a newspaper after it had been suggested that he might go back to the Church of England: laquaeus contritus est: my soul is like a bird escaped from the fowler's trap: the snare is broken, and I am escaped. 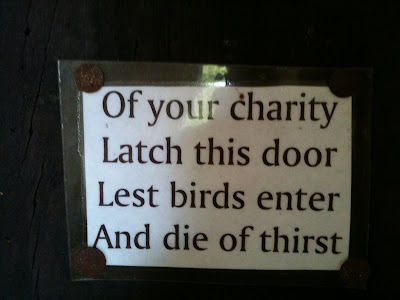 I saw this oddly apposite sign on the door of an Anglican church in a neighbouring village, a medieval church with some marvellous medieval wall paintings which had been painted over for centuries and are now uncovered. I can never understand how Anglicans can view the glories of Medieval Catholicism in their own churches and feel comfortable with Anglicanism.

Escape, little birds, while you can! And don't let anyone else in.
Posted by Joseph Shaw at 7:14 am