Is the Roman Canon vulgar? 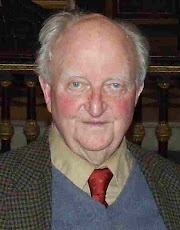 This is a question posed, by implication, by Dom Sebastian Moore OSB, in a letter published in The Tablet last weekend (1st October).

The substitution of the word “chalice” for “cup” in the Eucharistic Prayer has already been noted. The unconscious vulgarity of this change, at the most dramatic moment in the whole liturgy, is horrifying, as though the dignity of the word “cup” were not upheld by the hands that held it and passed it round, and to “improve” on this is to make of another good word a genteelism which betrays the mentality of the translator – and three times! It confirms all that we now know, thanks to The Tablet’s preparatory articles, about the process whereby this translation was arrived at.

(That's his photo, from his blog.) They have published my reply:

Dom Sebastian Moore repeats yet again in your letters pages (1st October) the suggestion that the use of the word 'chalice' in the new translation of the Missal is wrong. It would be astonishing if he or anyone could seriously claim that 'he took the cup' is an accurate translation of 'accipens et hunc praeclarum calicem in sanctas ac venerabiles manus suas'. If the authors of the Roman Canon had wished to avoid what Fr Moore regards as 'vulgar' they would certainly not have used such flowery language, and substituted a more prosaic word like 'poculum' ('cup') for 'calix'.

It is clear that Fr Moore and your other correspondents are not objecting to the new translation at all, but to the Latin original. This has been used continuously by the Roman church since the time of Pope St Gelasius I, who died in the year 496. Alas, I think the consultation period may have closed.

It makes no sense to suggest that the elevated language of the new missal translation is wrong but the even more elevated language of the original Latin is ok. As well as its frequent doubled adjectives ('holy and venerable') and other poetic tricks the Latin makes free use, for example, of archaism, which has not been allowed in the translation, exotic foreign words, and words only ever used in the context of Christian Latin. If the new translation is vulgar, the Roman canon must be utterly bourgeois.

The idea that only 'nobly simple' things avoid vulgarity, which rejects with disgust not only the Roccoco but the Gothic, which prefers the monotone to the melisma, is thankfully a fad passing away with Fr Moore's generation. It is small minded, petty, and parochial. What person of taste can tolerate only one style, and one, indeed, of only a handful of artists working in only a few decades corresponding to the formative period of their own lives?

Fr Moore's generation had their fun razing irreplaceable altars and dynamiting exquisite churches which they were incapable of understanding. He should allow the painful work of restoration go on without further interference.
Posted by Joseph Shaw at 9:50 pm

Labels: Latin, The Press, Translation of OF