The Introit for Midnight Mass, widely known as one of the most beautiful in the repertoire, has the surprising psalm verse: Quare fremuerunt gentes? Why did the pagans rage? 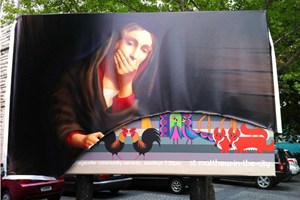 The verb fremo suggests roaring and growling as well as rage. The birth of Our Lord was not met with universal rejoicing. Good people rejoiced. The wicked were besides themselves with rage. In the Gospel story the wicked have their representative in Herod. But this is a cosmic thing. The same contrasting reactions will be on display when Our Lord comes the second time. The good will rejoice. The wicked will feel very differently. The events which bring God into the world are divisive (Matthew 10.34.)

Down in New Zealand, it seems there are militant liberal Anglicans. It seems they are in the camp of the enraged, and want to destroy the Christmas message. They put up an enormous poster of Our Lady looking, with horror, at a pregnancy test kit. The purpose of this blasphemous image is, I assume, to turn the Christmas story into some boring fable of modern life, but it is motivated by the same hatred of Christ that prompted Communists in the Spanish Civil War to shoot at statues of Our Lord. Only the means used differ: the hoped for result, the destruction of an image of transcendental value and redemption, is the same.

A Catholic layman has cut away the lower part of the image. The Reluctant Sinner, for whom I am indebted for the story, isn't sure if this was morally justified, and wonders if we should turn the other cheek. But tolerating an injustice done to God, and to Our Lady, is not an example of turning our other cheek. It turns the other cheek of the whole of society.

The question remains of what means should be employed to oppose such images. The reaction of secular commentators to this 'direct action' (or can only lefties use that term?) is to condemn Catholics in general as intolerant. I don't think that the reaction of the secularists would be any different whatever means had been used: if a Catholic had invoked religious hatred laws, for example, or picketed the Anglicans, or organised a letter-writing campaign. When Catholics criticise the actions of others they are being intolerant.

This looks like double standards, and it is. Using the language of tolerance here is humbug. But it is a humbug to which everyone who uses that kind of language contributes, when they try to use it to defend 'religious freedom'. The notion of everyone tolerating everyone else, of a big happy family of diverse opinions, only works as long as there are unspoken limits to the tolerance based on Christian assumptions: incest, paedophilia, Satanism, the latest crazy cult. Twenty years ago these limits were enforced not by reasoned argument but by shared assumption. Everyone just took for granted that we didn't tolerate those things, and that obvious Christian activities (nativity plays in school, street preachers) were ok, and that obvious Christian sensibilities (against blasphemy) should be respected. That's not true any more, and the incoherence of the notion of tolerance is being laid bare. What we are being left with is an official cult of secularism, which cannot tolerate Catholicism, because Catholicism has heavy things to say about right and wrong.

Herod couldn't kill the Christ child, and Christmas comes round again whether the secularists like it or not. Christ comes into the world, and demands our adoration, an adoration which has cost countless Catholics their lives. We may be required to put up with some intolerance ourselves.