Trouble for the Friars of the Immaculate 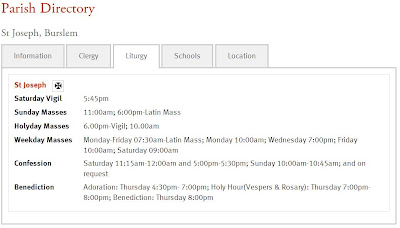 Update: Rorate Caeli has the full text of the decree (in Italian).

I do not know the exact policy of the Franciscans of the Immaculate towards the Extraordinary Form, but it should be emphasised that their parish in Stoke, in England, by no means gave the EF a place of prominence: see the horarium here (screenshot posted also for when the website is changed).

It is hard to know what people mean when they suggest that the EF was being 'imposed' by the Superior on the Friars. This horarium looks to me like the cautious and pastorally sensitive introduction of the Traditional Mass for which traditionally-minded priests are well known. Perhaps it is different elsewhere, but there is certainly no basis in England for Mgr Wadsworth's suggestion that the EF was causing pastoral problems. But England is included in the ban: why?

Messa in Latino and Chiesa has the shocking - in the literal sense - news that the Franciscan Friars of the Immaculate have a new Superior, not a member of the Order but a Capuchin, Fidenzio Volpi, and that the priests of the Order have been forbidden to say the Traditional Mass in public or private, without special permission. This is effective from Sunday 11th August.

This superior has been imposed on the Order by higher authority, replacing the founder, Fr Manelli.

I have independent corroboration for the truth of this story. No doubt more details will emerge.

The Franciscan Friars of the Immaculate, an order founded in 1969, have an apostolate in Stoke on Tent in England, where the Traditional Mass is celebrated every Sunday - or has been until now. It was recently announced that they will not be extending the five-year arrangement with the Archdiocese of Birmingham by which they run this parish, and so will in any case be leaving in September. The Sisters of the Order have both active and, at Lanherne in Cornwall, contemplative, houses in England. Lanherne went completely over to the Traditional Mass, Office, and other customs a few years ago.

The order has been moving in a Traditional direction for some years, and has recently been, for practical purposes, bi-ritual. Other orders and communities have developed in a similar way. Whenever there is change in an order, or for that matter resistance to change, there will be disagreements. I hope and pray that the Friars resolve these matters amicably, justly, and with due regard for the pastoral needs of the Faithful they serve around the world.
Posted by Joseph Shaw at 9:43 am