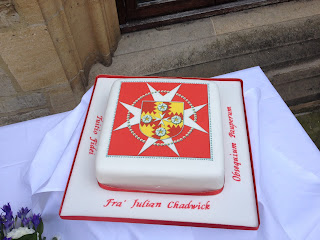 On Saturday I attended the Solemn Profession of Fra Julian Chadwick as a 'Knight of Justice' of the Order of Malta. That is to say, he took solemn and permanent vows of poverty, chastity, and obedience, like a monk. He joins the small but important group of 'professed knights' within the Order of Malta; most members of the Order are not professed in this way, they are often married, and are called 'Knights of Obedience' or 'Knights of Honour and Devotion'. They are similar to the tertiaries of other orders.

Julian also happens to have been my predecessor as Chairman of the Latin Mass Society. The cake, showing his coat of arms, was courtesy of Lucy Shaw Cakes. 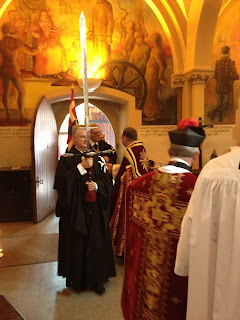 The Grand Master - the international religious superior - of the Order, Fra Matthew Festing, was there; he has a unique status as the head of a sovereign organisation: they have extra-territorial embassies in those countries which recognise them. He is preceded by a knight carrying the biggest sword I have ever seen. 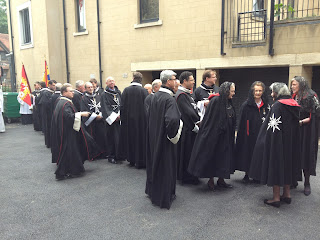 It took place at the Oxford Oratory. I expect there are more and better photographs elsewhere on the itnernet by now, I took these with my IPhone. It was an occasion of great solemnity - Basil Loftus would have had a fit. But then it was an occasion of special importance. How else are we to mark, liturgically, such occasions?

The vows and ceremonies of the profession are very impressive; the candidate is invested with sword and spurs, and then the choir dress, which (for a professed knight) includes a wonderful embroidered thing a bit like a stole with the Instruments of the Passion on it. He undertakes to defend the Faith with his life, if necessary, and serve the sick and the poor.

Solemn Mass in the Extraordinary Form was celebrated by Mgr Anthony Conlon, chaplain of the Order. It was a great gathering of friends of the Order, clerical and lay, as well as an impressive number of knights; the church was packed.

So congratulations to Fra Julian! Two other knights renewed their temporary vows, so there may be more such ceremonies in the next few years.
Posted by Joseph Shaw at 11:00 am