Roger Scruton on the Traditional Mass 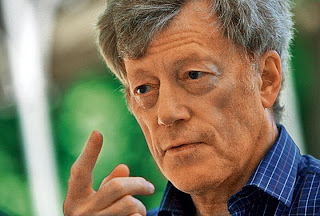 Roger Scruton, the philosopher, is a paradoxical, perhaps even a tragic figure. He is one of those many academics over the decades who stands on the edges of the Church, admiring its traditions and achievements, but unable himself to cross the line into belief. The views of such people can be interesting, sometimes they have insights derived from their critical distance, sometimes they get the wrong end of the stick. In both cases it may be important, because they are an important channel for how the Church's message ends up getting broadcast, or mis-cast - their writings reach people Catholics don't reach.

His 1998 book  'Modern Culture' is about how, given that we can no longer believe in God, we can perhaps appeal to culture to maintain some kind of civilised life and not fall completely into barbarism and despair. It is a completely Quixotic idea. You couldn't communicate the kinds of cultural understanding or appreciation he is talking about to even 10% of the population of Britain today, and anyway if you take away the religious realities the great cultural artefacts are about you take away their meaning and purpose. They may outlive these things a little, but not for long.

But here's an interesting passage on, of all things, liturgical reform. (Modern Culture, pp19-20)

Although the purpose of an act of worship lies beyond the moment, in the form of a promised redemption from the original sin of solitude, it cannot really be separated from the means. Means and ends are inextricable. Thought and experience are inseparable in the liturgy, as they are in art. Changes in the liturgy are of great significance to the believer, since they are changes in the experience of God. The question whether or not to use the Book of Common Prayer or the Tridentine mass are not questions of 'mere form'. To suppose that the rite is a matter of form is to imagine just the kind of separation of form and content which is the death (the death by protestation) of a true common culture.

Enlightened people often mock the controversies surrounding the liturgy, and profess not to understand the desire for the old words, save for 'aesthetic reasons'. They are right to see a resemblance between aesthetic interest and the act of worship. But they are wrong in thinking this resemblance to be merely accidental. The quasi-aesthetic absorption in the holy words and gestures is a component in the redemptive process. In participating, the believer is effecting a change in his spiritual standing. The ceremony is not so much a means to this end as a prefiguration of it. In the ritual the believer confronts God, and is purified by standing in God's gaze.

The jealosy over the liturgy is of a piece with God's jealousy over idols. Sacred words do not issue from the merely human voice, but from the deity...
There is a connection in thought here with both Martin Mosebach's ideas in his The Heresy of Formlessness, and in Anthony Archer's observations about working class Catholicism.

One problem of this kind of discussion of ritual is that, since it seeks to generalise about ritual, you can't distinguish between true and false religions. This means you are obliged to explain everything in purely natural terms, and not in terms of grace. Nevertheless, looking at the natural side of things has its uses: we shouldn't presume on grace if we haven't done the outward, natural things which prepare the way for the reception of grace. It is just arrogance to think that God will send his grace to people through an irreverent liturgy in which the truths of faith are obscured. As Redemptionis Sacramentum (6) points out, liturgical abuses make it harder for us to recognise Christ in the liturgy. We can take the point further: the point of the ars celebrandi, the Liturgical Movement, and all the effort on all sides in the liturgical reform debate has been about making the liturgy speak more eloquently and clearly to the Catholic in the pew, to remove impediments to grace.

What Scruton is pointing out, from this point of view, is that a common liturgical culture, shared with past generations and passed on to the next, is vital to the function of the liturgy, and that for this reason liturgical change itself is an impediment to grace.

The other very interesting thing he says in this chapter is to link concern for future generations with concern for the dead. By saying that the dead are in some sense a continuing part of the community, one can be motivated to lay down one's life for the continuing life of the community. The attack on former generations, their memory, their achievements, is ultimately an attack on the community as it exists now, and threatens its future.
Posted by Joseph Shaw at 10:00 am