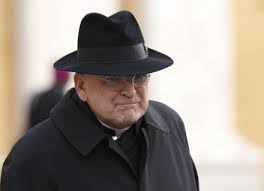 I have had other and better things to think about than Mgr Basil Loftus in the last few weeks. But just to remind him and others that I have not forgotten about him - far from it - here are a couple of quotations from his latest effort: 19th Jan, The Catholic Times.


It begins:
'Catholics who are divorced or remarried, those who are gay, and those who do not believe that the physical expression of married love must always be open to the conception of children, are not the first ones, or even today the only ones, to find themselves in a seemingly impossible situation. And long before Holy Father Francis came on the scene practical solutions have had to be found. They can help us now to understand what Francis has termed his "epoch of mercy", his practical solution.'

Later in the same column, he writes:
' "If in our heart there isn't mercy, the joy of forgiving, we are not in communion with God" (Pope Francis' Angelus Address, 15th September 2013). Surely there is food for thought here for those who are so keen to excommunicate and thus to deny Holy Communion to politicians who have to genuflect in the Temple of Rimmon when their political masters debate issues of sex and marriage which are not compatible with Church teaching. Effectively, it seems that it is those judgemental zealots themselves who "are not in Communion with God", even though one of them, Raymond Burke, is, for the moment, the Cardinal Prefect of the Church's highest law tribunal.'


The practical contradiction between criticising 'judgementalism' and then attacking a named Cardinal as a 'judgmental zealot' 'not in Communion with God' is, sadly, typical of Loftus' writings.


Is there any point saying that, since Cardinal Burke has been confirmed in office, he is Pope Francis' head of the Apostolic Signatura? Perhaps not. Loftus' angry polemic operates at a level rational criticism can't reach.

He has form. Last November he referred to 'Sri Lankan cappa magna fetishist and Tridentine-rite devotee, Malcolm Ranjith.’ Last June (in a Letter to the Tablet) he said a talk by Bishop Davies of Shrewsbury 'may even call for anger.’

(Letter in The Tablet 22 June 2013): ‘Something has to be done to challenge those cardinals, bishops and priests who simply don’t get it. Is an appeal for £500,000 for work on Archbishop’s House, Westminster, and the some £1 million reportedly spent recently on the nunciature, compatible with the example Francis wants to “send ... to other cardinals, bishops and priests” when he lives in a clergy hostel?’

(The sum of £1m to be spent on the Nunciature is, I hasten to add, pure fantasy.)

When those attached to the Traditional Mass criticise bishops, this is often held up as a demonstration that we are a practically schismatic. I certainly won't and couldn't claim all such criticisms are justified. But what I will say to those worried by traddy criticisms: Don't you read the Catholic newspapers? What sort of tone are they setting? The Catholic Times is a newspaper operating with ecclesiastical approval. Kevin Flaherty, Editor, please note.
Posted by Joseph Shaw at 3:11 pm