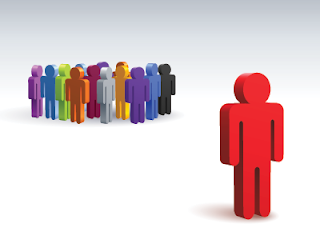 As I quoted in my last post, Pope Francis has written, in his Exhortation Evangelii gaudium, that a parish must not be 'a self-absorbed cluster made up of a chosen few.' (28)

The second idea I want to put forward in relation to these remarks of Pope Francis is about open and closed forms of worship. What I mean derives from the different conceptions of participation characteristic of the traditional and the reformed liturgy. In the traditional liturgy we participate by uniting heart and soul with the offering at which the priest officiates. We do this mostly in silence, our prayer stimulated and focused by the ceremonies, chants and so on of the liturgy, which lend themselves so well to contemplative engagement. The usual understanding of 'active participation' following the Council has it that it helps participation if the Faithful are saying and doing things: making responses, carrying up the gifts at the Offertory, reading the readings, leading bidding prayers, distributing Communion and so on. This idea is not the teaching of the Church; on the contrary it has come under a lot of criticism from Bl. Pope John Paul II and Pope Benedict XVI. Nevertheless it has been very influential, and one can see the results. Pope John Paul II felt it necessary to underline the point that one can participate by listening to a reading, and not just be reading it (aloud, at the lectern) oneself:

'Worshipers are not passive, for instance, when listening to the readings or the homily'.

If that needed saying, then heaven help us. (See the Position Paper on Participation here.)

My point is this. A liturgy which has been shaped by the second understanding of participation is one which is closed to outsiders. The person who comes in from the street (if only because he is on holiday), who doesn't know the responses, isn't on the Extraordinary Minister of Holy Communion Rota, etc. etc. has no way of participating in this liturgy. He becomes what liberal critics of the Traditional Mass call a 'dumb spectator.' Sometimes proponents of this kind of liturgy are aware of the problem and try to meet it by having 'greeters' at the entrance, shoving various books and flyers into your hand as you go in, inviting you (at small week-day Masses particularly) to come and stand hand in hand round the Altar at the Consecration, and so on; again, English-speaking tourists, they worry, should not have to mingle with the natives when they go to Mass. For anyone not weirdly extroverted, this can be a very trying, not to say humiliating, experience, as if one turned up at the wrong dinner party and the host and other guests tried to treat you as a old friend when you'd never met them before. What is quite out of the question, in this kind of liturgy, is that you should engage with it at your own pace, on your own level, in prayer. Prayerful contemplation is simply not allowed: it will be interrupted within a few minutes, and you'll get funny looks.

The opposite is the case with the Traditional Mass. You are, essentially, left alone, but left alone united with the community in the act of worship. You may have things given to you to help you follow the Mass, there may even be responses (especially at a sung Mass), but no one will think you odd if you just look at what is happening on the Alter in prayerful silence. And for the Canon, that is what everyone is doing. You are drawn in: it may be to something unfamiliar, if contemplative prayer is unfamiliar, but it is something which you can do your own way. It is not a Procrustean bed; you can make of it what you will.

This is open worship: in a very practical, sociological sense it is open to everyone who turns up. This has always been a very Catholic attitude: as the sociologist Anthony Archer pointed out, people were never turned away from Mass because they are in their work clothes. But we have lost something of this in the modern parish, where so often everyone else can appear to be on first-name terms.

In a more abstract sense the Traditional Mass is open because of the universality of Latin. This was the major argument in favour of Latin at the time of the reform, and Bugnini acknowledged it, saying only that universality would have have to be emphasised in some other way. But it hasn't been. Every modern parish is in a bubble far more impermeable to outsiders than that surrounding the different Rites and Usages of the Middle Ages. You can read the words of a 14th century pilgrim, Margary Kempe, about experiencing the liturgies of Jerusalem, Germany, Rome, of the Franciscans and her own Sarum Rite, and she appreciated everything and was excluded nowhere. Not once in her travels does she complain about the liturgy. A modern Catholic can't go to the next parish without coming back with a litany of grumbles.
To return to the theme of the last post, what of the people who attend the Old Mass? Those not familiar with Traditional Catholics may think of them as an inner core, an elite within an elite, in the Church. In fact there are many in traddy congregations who are rather marginal Catholics, students who don't always make it to Church, new converts, people who are finding out about the Vetus Ordo for the first time, people in complex personal circumstances, married people with children whose spouses don't attend, and those unable to receive Communion. The Traditional Mass, in many cases, is what keeps them going, spiritually. It doesn't do so because it affirms them as members of some artificial, closed, 'community', it does so because it facilitates their participation in the Church's eternal offering of worship to God.
Posted by Joseph Shaw at 11:58 am