The weekend before last The Tablet published a letter whose tedium was nicely balanced by its absurdity. It began:


Recently we went to Venice to celebrate 25 years of marriage, and had a wonderful time visiting this extraordinary city with its remarkable hospitality. We attended Mass, and visited seven churches which as it happens were all offering Mass at some time in the day. It was lovely to hear the bells calling us to this prayer. But we were shocked at the Church’s inattentiveness to visitors. Venice welcomed 16 million tourists last year. The principal languages of the international visitors are German, English and French. We saw no evidence of any attempt in any church to explain anything about the Christian faith in any language except Italian. In fact, we saw only one church with information about the Christian faith. We saw no evidence of Mass being offered in any language except Italian. Hospitality? Well, at least some of the church guardians were polite as they took the entry fee. 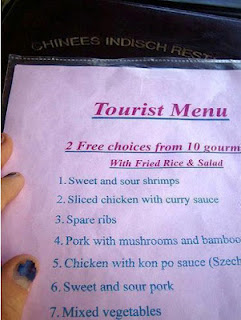 The idea of the liturgical equivalent of the 'tourist menu', at the sight of which every self-respecting visitor flees from a restaurant, is alarming. The Tablet published my reply. As usual I highlight what they edited out.


Mr & Mrs Barton (Letters, 30 June) were disappointed to find Masses in Venice only in Italian. But it hardly seems attractive for Italian resorts to provide 'tourist Masses' in English and German. Do we really want to travel the world in a bubble with our fellow Anglophones?

What the Universal Church needs is a universal language. Funnily enough, it has one: Latin, a language 'friendly to all', as Pope John XXIII put it. On future visits, the Bartons will find the traditional Latin Mass being celebrated in Venice by an English-born, polyglot priest of the Fraternity of St Peter, Fr Konrad Loewenstein, at the Church of San Simon Piccolo. Googling 'FSSP Venice' will give them all the details.

I wonder why they removed the word 'polyglot'? Is it too long for Tablet readers? Fr Loewenstein, being born in England of a German family, and living in Italy, speaks several languages. The Fraternity of St Peter is a truly international order. Fr Loewenstein's father, Prince Rupert Loewenstein, is of course one of the Latin Mass Society's Patrons, a very long-standing supporter of the Society. May Fr Konrad's apostolate continue to flourish! This isn't a brilliant photo of Fr Loewenstein, but I took it myself when I saw him at the FSSP Seminary at Wigratsbad, Bavaria, on the occasion of the ordination of another multi-lingual Englishman, Fr William Barker, in 2009. Fr Barker, too, is working in Italy, in Rome.

The FSSP Venice website is rather magnificent, it is one of those which bursts into song as soon as you download it. Pay them a visit!
Posted by Joseph Shaw at 5:44 pm