Pope Benedict: Silence is a means of communication 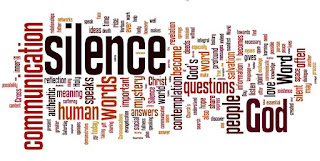 In the FIUV Position Paper on Silence in the liturgy, Pope Benedict's book 'The Spirit of the Liturgy' was quoted, a magnificent passage on the profound prayerfulness of the silent Canon found in the Extraordinary Form.

I've recently discovered another very interesting discussion of silence by Pope Benedict, in an exercise of the Papal Magisterium, a 'Message for World Communications Day' only this May, 'Silence and the Word'. He doesn't address the liturgy directly, but he has a lot of interesting things to say about silence in this short reflection.

He starts with the obvious point that silence is a necessary part of communication, since only if you shut up yourself can you hear what the other person is saying. But he goes on to say that silence can be its own form of communication.
It is often in silence, for example, that we observe the most authentic communication taking place between people who are in love: gestures, facial expressions and body language are signs by which they reveal themselves to each other. Joy, anxiety, and suffering can all be communicated in silence—indeed it provides them with a particularly powerful mode of expression. Silence, then, gives rise to even more active communication, requiring sensitivity and a capacity to listen that often makes manifest the true measure and nature of the relationships involved. When messages and information are plentiful, silence becomes essential if we are to distinguish what is important from what is insignificant or secondary.

This finds its greatest application with God. God speaks to his creatures not only in words, but also by His silence. Quoting an earlier address to another audience, the Holy Father goes on:

As the Cross of Christ demonstrates, God also speaks by his silence. The silence of God, the experience of the distance of the almighty Father, is a decisive stage in the earthly journey of the Son of God, the incarnate Word …. God’s silence prolongs his earlier words. In these moments of darkness, he speaks through the mystery of his silence. 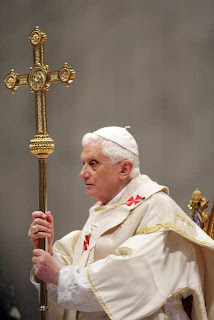 The silence of the Cross was often appealed to by the Fathers in their discussions of the silence of the Canon of the Mass. The effective communication to us of the important fact that God is Holy--is above us, is separated from us--by His silence, is a very interesting thought, which again recalls the Holy Father's published views on the importance of the liturgy communicating a 'sense of sacrality', as the Extraordinary Form does (as he said in the Letter accompanying Summorum Pontificum).


If God speaks to us even in silence, we in turn discover in silence the possibility of speaking with God and about God. “We need that silence which becomes contemplation, which introduces us into God’s silence and brings us to the point where the Word, the redeeming Word, is born”

I completely missed this at the time it happened; there's a not-particularly-interesting video news report about it here, maybe if they'd reported more about what the Pope said rather than what a couple of bloggers you've never heard of are thinking, it would have made more of an impact!
Posted by Joseph Shaw at 9:16 pm