Cornwell on Pius X: letters in The Tablet. 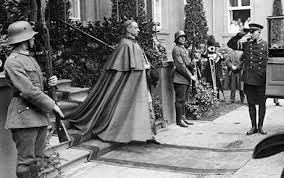 Further to my previous post, I wrote a letter to The Tablet about the egregious John Cornwell, and his claim that children didn't go to confession before 1910.

They published most of it. The cuts are predictable; what is missing is in bold.

John Cornwell asserts in your pages that 'confessing children in the seven to 13 age group was an innovation brought in by Pius X'. Elsewhere he has said that a 'decree' of Pope St Pius X 'lowered the age of a first confession' from 13 to 7, in 1910.

Cornwell is here displaying the same problematic relationship with the facts which has long troubled readers of his attacks on Pope Pius XII. St Pius X issued no decree on the age of confession in 1910, or in any other year. He didn't need to: the age of first confession had been fixed at the 'age of reason', that is, about 7, by the Fourth Lateran Council in 1215 (canon 21). Pius X's 'innovation' had taken place 695 years earlier. It was confirmed by the Council of Trent in 1551 (Session XIV, canon 8).

Can we expect a correction? 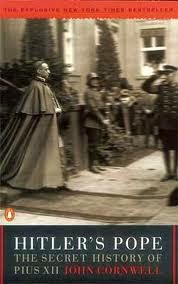 The letters editor tells me he was only cutting to save space. Believe it who can.

If Cornwell has any academic integrity he will correct his (let us suppose, honest) mistake about Pius X. He never did about his 'mistakes' about Pius XII; it took years for the publishers to even partially correct the label on the cover photograph used on 'Hitler's Pope', for example, and as far as I know there has never been an acknowledgement of the howler from Cornwell himself.

Let me explain. In 1999 Cornwell's book 'Hitler's Pope' appeared. On the American edition the above photograph appeared, with the caption (as usual, on the back of the book), saying that this showed Cardinal Pacelli in March 1939: the very month he was elected Pope, and well within the time of Hitler's ascendancy. The implication is that it showed Pacelli paying a visit to Hitler.

But the photograph was actually taken in 1927; Pacelli was leaving a reception to celebrate the birthday of the President of Germany under the Weimar Republic, Paul von Hindenburg. The soldiers standing guard are not soldiers of the Third Reich; their distinctive helmets were, in fact, developed during the First World War.

The caption, accordingly, was a bare-faced lie. It gained plausibility from the fact that the soldiers are reminiscent of German soldiers of the Second World War. The car slightly undermines the late date: it is clearly a car from the 1920s, with its square door. So what did they do? They cropped off most of the car. Then they made most of the photograph fuzzy, bringing Pacelli out into stark relief. It is no longer clear that the chauffeur is a chauffeur: you might think he was wearing an SS uniform.

We are not dealing with a serious academic debate, here. It is just a cheap trick.

Here is an indication of what the Nazi's really thought about Cardinal Pacelli: a Nazi cartoon shows him cuddling a Jewish woman holding a Communist newspaper, who is preparing poison labeled 'anti-Nazi'. Hitler was enraged when Pacelli was elected Pope.

Now why exactly does The Tablet want to publish Cornwell's latest helping of bile and suppress any references, however politely expressed, to doubts about the truthfulness of his previous book?
Posted by Joseph Shaw at 3:28 pm