Reform of the Reform: what is the key issue? Part 1 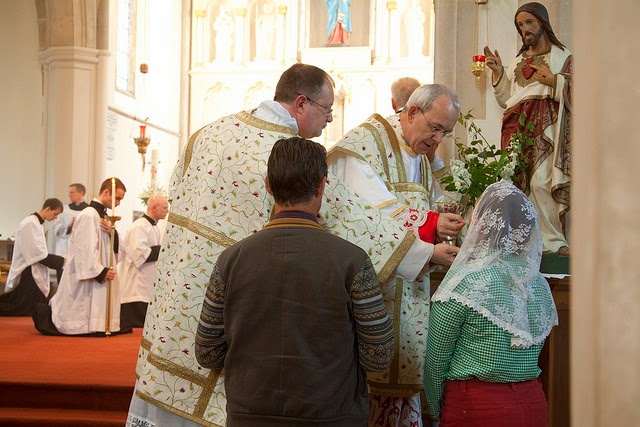 While Bishop Schneider was in England we were reminded of the issue of Communion in the Hand: he has written two short books on the subject. The problem with Communion in the hand can be summed up as the failure to preserve the Blessed Sacrament from either accidental or deliberate profanation. (Does any need to be reminded that you can, or at least could, watch a YouTube video of someone profaning a consecrated Host stolen at Communion time from a certain well-know London church?)

There is, incidentally, no real precedent for the casual form of reception of Communion in the history of the Church; St Cyprian, who describes the way they received Communion in the hand, in Jerusalem, in the 4th century, which bears only a slight resemblance to the modern practice, describes fragments of the Host as 'more precious than gold dust'. See the FIUV Position Paper here.

The modern practice of Communion in the Hand strikes at the heart of the faith in the Blessed Sacrament of the ordinary Faithful, who are not exactly being bombarded with high-quality catechetism in other forms. So, yes, this is extremely important.

It is easy to see how difficult it is for priests to address this issue. So how else can the liturgical crisis be addressed?

Well, there is the issue of Liturgical Orientation. This cartoon has been doing the rounds, and yes it is a no brainer really. Fr Michael Lang of the London Oratory has written a book on this subject which has become quite well known; it is worth reading if you need to be convinced, or want to see the arguments close-up. The nub of it is that, as Cardinal Ratzinger (remember him?) argued with startling force, the modern practice creates the impression that the community is worshipping itself; it is a 'closed circle', not opening out towards God.

There is, again, no real precedent for the modern practice in the history of the Church; the ancient churches oriented so that the priest could face east while looking into the nave, which are by no means the majority, would not have witnessed eye-contact and a standing-round-in-a-circle atmosphere; for heaven's sake they had curtains round the sanctuary in many cases. See the FIUV Position Paper on the subject here.

The modern practice of celebration 'facing the people', which is not even mentioned in the documents of Vatican II, is undermining the very concept of worship for generations of Catholics, who are not exactly being bombarded with catechesis, liturgy, or religious art, emphasising the transcendant nature of God, to counter-balance it. So yes, this is very important.

However, this is also very difficult for priests at the sharp end to handle this issue. They can expect some very negative reactions if they try. So what else is there?

Well, there are Altar Girls. Like the practice of Communion in the Hand, the modern practice grew out of defiance of the Church's law, and is permitted only with heavy restrictions. In both cases, of course, the restrictions are ignored. But the official documents - I'm not talking about loonies on the internet, but the Prefect of the Congregation for Divine Worship, writing at the behest of St John Paul II - makes it abundantly clear that the problems created by the practice make it, well, problematic. See the FIUV Position Paper here.

The nub of it is that, given the close connection between Acolytes and the priesthood, the service of the Altar is giving out the message that, if women cannot be ordained, it is an arbitrary and unjust restriction. By allowing it we are undermining the notion of a male priesthood and destroying vocations. It is not as if the Faithful are being bombarded by messages supporting the Church's teaching about the complimentarity of the sexes from the wider culture.

This is politically very sensitive for parish priests. I don't blame any priest finding himself surrounded by Altar females not wanting to kick this hornet's next. We all know what kind of support priests are likely to get from most bishops if they take a stand on this. A one-way ticket to Outer Mongolia would be at the mild end of the spectrum of possible reactions.

There are plenty of other issues. A case can be made for their importance, and the difficulty of doing anything about them is even easier to describe. The use of Latin in the liturgy was actually demanded by Vatican II - yes, it is important. Most parishes would assume that their priest has gone stark staring mad if they heard him saying the Canon in Latin, however. (FIUV Position Paper here.) Then there are things which only changes to liturgical law can make possible, like the use of silence (FIUV Position Paper here), which St John Paul II said we needed to 'rediscover' in the liturgy. And there are the problems raised by the Novus Ordo Calendar (such as the loss of Septuagesima), the Lectionary (such as the loss of St Paul's admonition on unworthy Communions from Corpus Christi: see the FUV Position Paper), and the Proper Prayers (see Lauren Pristas' new book on this).

Priests and scholars pushing the Reform of the Reform tend to focus on just one or two issues; one problem is that they are not they same one or two issues. But it doesn't make any difference. The political and ideological obstacles to rolling out a reform of the reform on any one of these issues are overwhelming. In the FIUV papers we've modestly suggested lengthening the Eucharistic Fast and restoring Holy Days to their proper dates; these might happen, just; that would be progress, of a limited kind. We have now had the improved translation of the Novus Ordo Missal; that is big progress, but the kind of effort which was required for this is not going to be repeated for the other issues any time soon, and it only affects the English-speaking world.

It is good that we've had this debate over the last couple of decades, but neither the parish-by-parish model of the Reform or the Reform nor the top-down model are going anywhere right now. Tomorrow I'll make a positive proposal.