Pope Francis and the Neo-Cons: scandal and denial 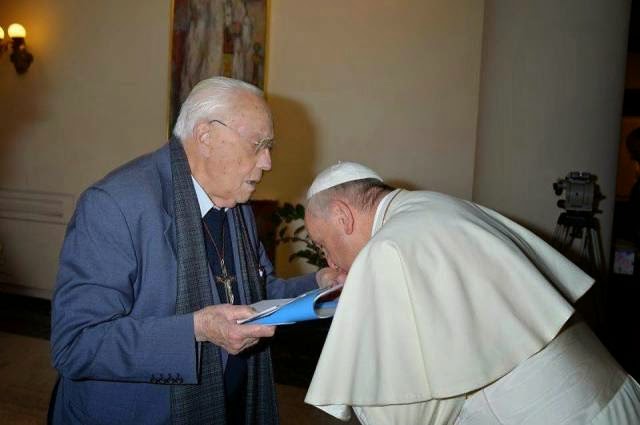 I'm still catching up on things which happened either during the Chartres Pilgrimage or during the busy period of preparation before it, so readers must forgive me for reflecting on something which happened (shock!) more than five minutes ago.

It was Pope Francis' interaction with an Italian priest, Fr. (Don) Michele de Paolis. It would seem that Fr de Paolis was invited to Rome to concelebrate with the Holy Father at one of his private Masses, and that in saying goodbye Pope Francis kissed his hand.

Fr de Paolis is well known as a campaigner for a change in the Church's teaching on homosexuality, so this, as LifeSiteNews (LSN) expressed it, 'raised eyebrows'.

It is interesting to note this little incident; it was public, intended for public consumption, it was photographed and reported and Fr de Paolis wrote the whole thing up on his Facebook page.

The really interesting thing, however, is what happened next. LSN, in the person of the hugely respected Hilary White, had written the story with a completely straight bat. That is to say, she simply reported the facts, as they were in the public domain: what happened, and why it might be thought interesting that it happened, namely a little about Fr de Paolis' work and the public perception of him in Italy. There was no speculation about Pope Francis' intentions; there was, after all, no public statement about them. This report, however, caused a sort of psychological melt-down among a group of what we must call American 'Neo Conservative' Catholic writers, who started attacking LSN and Hilary White. The crucible of this melt-down was the Facebook page of the blogger Simcha Fisher, where she was joined by her husband Damien Fisher and the blogger Mark Shea, among others. See the whole thing here. A taster of this Lord-of-the-Flies type of cyber-bullying:

Mark Shea: LSN has fulfilled the classic definition of journalism: translating complex ideas into execrable prose. Eponymous Flower as a source for something? And Hilary White tasked with writing objectively about Francis? Seriously? God save the Church from the Greatest Catholics of All Time and their endless hatred for this good and holy Pope.
...

Damien Fisher: How about some basic respect for the Holy Father and the faith rather than using a biased and anti-Catholic writer to cover Pope Francis? (Tell me how Hilary White, who condemns Catholics for attending the NO Mass is the right person for the job.)

Mark Shea decided to blog about it as well, but despite the opportunity for sober reflection which (one would hope) this would afford, he came out with this:

I’m so sick of these people. The author of the piece hates Francis with a white hot passion, a fact that must be as surely known to her editors as to anyone else with a pulse capable of reading her many literary acts of voiding her rheum in the Holy Father’s face. Likewise, her main source, the deranged Eponymous Flower, hates him even more. The piece makes so many logical leaps and ill willed assumptions, it’s hard to keep count. It’s all calculated to gin up hatred for the Holy Father. God forgive them.

To which all one can say is, with Hamlet's mother: Alas, he's mad.

The claim these delightful people are making is that the story is in some sense an attack on Pope Francis. What they are not claiming is that it is in any way false or even misleading: not one of them at any point seems to have put a finger on what is actually wrong with the story in its relationship to the facts. (If there are so many 'logical leaps and ill willed assumptions', would it have cost you so much to specify just one of them, Mr Shea?) Furthermore, they feel so strongly about it that they are willing to disregard all charity, to accuse the whole of LSN as guilty by association, and to bring up everything they've ever read on the site which they didn't like as confirmation that LSN is, really, evil. Oh and Hilary White likes the Traditional Mass, that shows she's wicked too.

How could reporting Pope Francis' actions be regarded as 'slander', something only a 'biased and anti-Catholic writer' would do? The implication would seem to be that it is Pope Francis who is attacking Pope Francis, by presenting himself in a bad light, and that anyone who repeats these attacks must hate Pope Francis.

In other words, these neo-Conservatives are so deeply scandalised by what Pope Francis did, that they want to hush it up, and will engage in a sort of Hate Week against anyone who won't play along.

Why are they so scandalised? Why is it so intolerable for them to hear about Pope Francis making this gesture?

First off, here's my own thought about this action of Pope Francis. Pope Francis has a consistent policy of being friendly to people at the level of personal meetings. He's been friendly to Bishop Fellay of the SSPX. Obviously he thinks that it is good to be nice to people, it makes everything easier if one has a personal rapport. All the same, he went the extra mile with this priest and the danger of scandal is increased; it begins to look like the sort of policy I have criticised before, where the enemies of the Church are given a warmer welcome than her most loyal sons. If I were Pope, I wouldn't do this.

On the one hand, I don't expect Popes to be perfect in the formulation and application of prudential policies about how to deal with dissidents. If someone says to me: 'here's a Pope, today or in history, who made a prudential mistake', I don't immediately have a heart-attack.

On the other hand, while Catholics can criticise such policies, I don't expect my own judgement always to be superior to that of the Pope, who has more information at his disposal and the grace of his Office to aid him. The Pope is fallible on such things, and obviously I am as well.

Why can't the Neo-Cons look at the situation calmly, like this? Why are they getting so worked up? For two reasons. As I have written before, they are are very keen on the medicine of punishment. They think that the problems of the Church arise from a lack of discipline, and can be solved by an application of discipline. They want, as patriotic Americans, to kick ass. By the same token they want to stop people talking about the subtle but pervasive effects of bad liturgy: see me on Mark Shea, and on Simcha Fisher. So when the Pope tries to deal with a problem priest by kissing his hand, and not by having him publicly flogged, this is peculiarly painful for them.

The other reason is that they have adopted a positivistic Ultramontanism, which says that for practical purposes the Pope cannot err. In theory they accept the standard distinctions between fallible and infallible teaching, and between dogmatic and prudential issues, but in practice they have a very strong tendency to roll all the issues together and say that we must not just accept but regard as above criticism everything the Pope says and does. They do this without abandoning all their own positions, however, so they have to engage in absurd interpretations of what the Popes do and say to make them fit in with what they, personally, want them to do and say. The most gloriously loopy of these so far must be Jimmy Akin's suggestion that, if the Pope suggested, over the phone, to a woman married to a divorcee, that she could receive Communion, he might have annulled the first marriage and validated the second right there and then, on the phone. (Akin later took this lunacy off his blog.) I suppose we can look forward to more such intellectual contortions as time goes on. But when they get the chance to deny that something ever happened, or hush it up, that is, naturally, even better.

There is a terrible danger with this kind of Ultramontanism. Not only is it false, but it is the flip side of Sede Vacantism. The Sede Vacantists think that the Popes must be pretty-well perfect, and they realise that the men elected as Pope and regarded by everyone as Pope are not perfect, so they conclude they can't be Pope after all. The Ultramontanist has only his own self-delusion to rely on to fend off the same conclusion. Heaven help anyone who punctures that self-delusion! These Neo-Cons will defend it to the death.

The greatest danger to it, however, is not Hilary White or LifeSiteNews, but Pope Francis himself, who is delightfully free of the Neo-Con ideology. The other day he made a revealing remark, in the course of defending the war record of Pope Pius XII:

I do not mean to say that Pius XII did not make mistakes - I myself make many...