The shrine of Our Lady sous terre is, according to legend, a continuation of a pre-Christian shrine to the Matri Futurae Dei Nascituri: to the Mother of the God to be born. Upstairs in the main church is image of Our Lady of the Pillar.

The original shrine images were destroyed at the French Revolution, as the English ones were in the Protestant Revolt, but the Faith survived, and the shrines were restored. Also preserved from the flames was a remarkable relic of Our Lady: her veil, the Sancta Camisa. 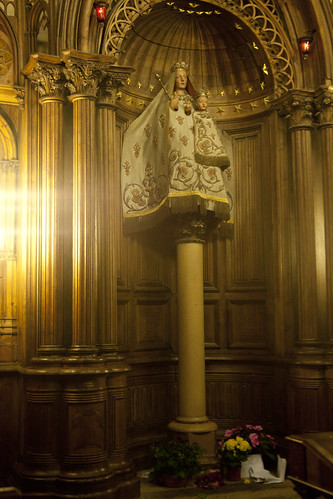 These things have drawn pilgrims down the ages. The tradition was first created by students of the University of Paris in the Middle Ages; but what with the Revolution and the wider attack on popular devotions, led by the crypto-Calvinist French Jansenists, it had to be restored. It is interesting to see a 'Youth Pilgrimage' at Pentecost being made in 1938 as a response to the Nazi takeover of Austria (see the Catholic Herald archive); this report from 1948, under the headline proclaiming that 7,000 had made the pilgrimage that year, explains more:

The student pilgrimage to Chartres was initiated by the celebrated author, Charles Péguy, who was killed during World War I. He went to Chartres from Paris on foot to thank the Blessed Virgin for recovery of his daughter who had been seriously ill.

The pilgrimage has gained wide popularity since the end of World War II. In 1937, only 150 students took part in it; last year there were 6,000.

This year the pilgrims traveled the first 40 miles in a special train, and walked the remaining 25. Each carried a knapsack with a two-day supply of food and sleeping equipment.

This Catholic Herald report from May 1954, tells us of its continuing expansion: 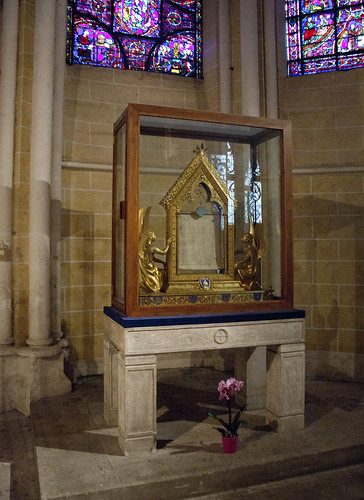 Nearly 13,000 university students from Paris and other parts of France, Germany, Austria, Belgium, Holland and Switzerland, took part last week in the annual pilgrims' walk to Chartres. Meditating and singing hymns as they marched with their chaplains. In the little town of Gallardon one of the students was baptised on Saturday evening by Mgr. Menard, Auxiliary Bishop of Chartres, surrounded by some 3,000 radiant, if tired, young men and women holding lighted candles.

After Vatican II the pilgrimage went into a decline: I'd be interested to know the details, but exactly the same thing happened in England to the great Guild of Our Lady of Ransom nine-day pilgrimage from London to Walsingham, and the Tyburn Walk. It was Traditional Catholics who once again revived and preserved the Chartres Pilgrimage, as they have so many other traditions, and the revived pilgrimage has reached similar numbers to the 1950s level, despite French trads representing only a tiny fraction of the French Catholic population, itself a small fraction of the French Catholic population in the 1950s. After 1988, in fact, the pilgrimage split, with the supporters of the SSPX walking the route from Chartres back to Paris, with a smaller but still very large number. Even without them, the Chartres Pilgrimage has over the years varied between 8,000 and 15,000; numbers are inexact in part because some people join the pilgrimage on the second and third days.

Furthermore, both groups are doing it the hard way: no special trains for them, we walk every weary mile.

It would seem that what French traditional Catholics lack in numbers, they make up for in zeal.

Do join us in Chartres next year - and to get you in the mood, come to Walsingham, on the August Bank Holiday weekend. That is only 55 miles - a good preparation for the 75 of the Chartres Pilgrimage. 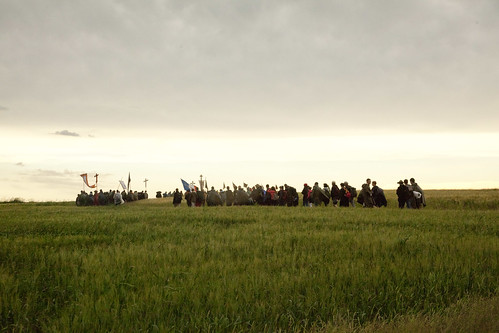