The Christ Child in the Temple 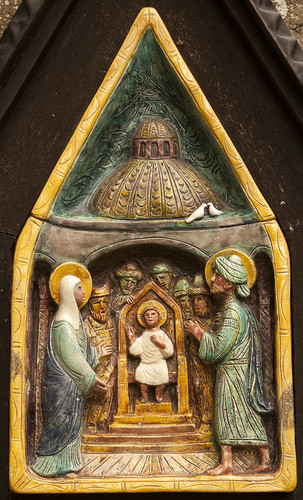 We know what Jesus did on that occasion. Instead of returning home with his family, he stayed in Jerusalem, in the Temple, causing great distress to Mary and Joseph who were unable to find him. For this little “escapade”, Jesus probably had to beg forgiveness of his parents. The Gospel doesn’t say this, but I believe that we can presume it. Mary’s question, moreover, contains a certain reproach, revealing the concern and anguish which she and Joseph felt.

These words, from Pope Francis' sermon last Sunday on the Holy Family, are puzzling. Because we know exactly how the Christ Child responded to the question put to Him by Our Lady - a question which does indeed 'contain a certain reproach'. St Luke's narrative continues with the perplexing but pregnant words of the Man God:

And he said to them: How is it that you sought me? did you not know, that I must be about my father's business?

St Luke adds three further pieces of information. First, that they did not understand this reply. Second, that Our Lady kept these words of His in her heart. And third, that, returning to Nazareth, He was subject to them.


It is not unusual for Our Lord to say things which His hearers did not understand: it happens a great deal in the Gospels, and the uncomprehending hearers include not only hostile Pharisees, but open-minded crowds and sympathetic disciples. In this case the sinless Virgin herself did not understand. What is the point of saying something no one understands? It is no mystery: St Luke tells us. She kept the words in her heart. She came to understand them later, as the disciples did with many of Our Lord's words and actions. The outstanding examples of course were Our Lord's prophecies of His coming Passion and Resurrection; another was His Transfiguration.

The Christ Child's sojourn in the Temple was not some childish prank. It was a prophetic action, with layer upon layer of symbolic meaning. It speaks of Christ's taking up of His authority, and of His divine Wisdom. It speaks of His future disappearance for three days in the Tomb, and of His triumphant return. It gave Our Lady a reminder of the prophecy of Simeon, delivered in the same Temple, of the sword which would pierce her heart. It reminded St Joseph that the authority he had over Our Lord was one which Jesus had voluntarily taken upon Himself, just as He submitted voluntarily to the authority of the Mosaic Law.

The words of the Holy Father don't seem very carefully chosen; the best I can suggest as a pious reading of them is that the 'escapade' would have required a kind of reconciliation among the Holy Family, at the emotional, though not at the moral, level. Even this is awkward, however, in light of Our Lady's perfect alignment with the Divine Will. 'Begging forgiveness' is hardly the phrase required. It is Our Lord's confidence in His sinlessness which is truly shocking to a modern ear. (John 8:46)

Which of you shall convince me of sin?
The Holy Family is indeed a model of all human families, but this homely fact should not lead us into reading Scripture in an unspiritual way. In reading the charming infancy narratives, and this single story of Our Lord's boyhood, we have to keep the whole of the Gospel message in mind. These stories are overshadowed by the Cross. What Our Lord did to Our Lady and St Joseph at twelve, causing them pain and anxiety, he would do again, in a more extreme way, to Our Lady and the disciples, when he was 33. All motives of human affection, of being nice to people in a superficial and mundane way, would in that decisive moment give way to the one truly important consideration: of being about His Father's business.

Support the work of the LMS by becoming an 'Anniversary Supporter'.
Posted by Joseph Shaw at 8:08 pm