Book of Gomorrah: a new translation 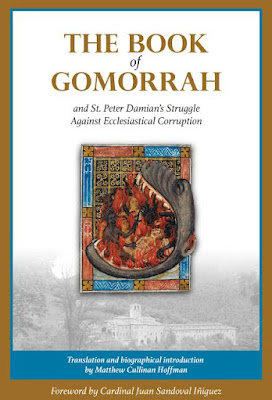 Another book which I was allowed to read in advance of its publication is this new translation of St Peter Damian's famous work, The Book of Gomorrah.

It is most famous because of its Jeremiah-like condemnations of unnatural sexual acts, like this from Chapter 20:


“Why, I ask, O damnable sodomites, do you seek after the height of ecclesiastical dignity with such burning ambition? Why do you seek with such longing to snare the people of God in the web of your perdition? Does it not suffice for you that you cast your very selves off the high precipice of villainy, unless you also involve others in the danger of your fall?”

But there is more to it than that. It is, in fact, a long argument for the seriousness of sexual sin, including the sexual exploitation of others, based on the Church's early penitential discipline. That discipline, which stipulated a certain number of days, months, or even years, of public penance for various sins, had long been superceded, from a canonical point of view, by the time St Peter Damian was writing, in the context of more frequent confession and other developments. However, St Peter argued that it continued to have relevance as the testimony of the earliest ages of the Church to the relative and absolute seriousness of sin. If we no long have to fast for seven years for adultery, for example, we should take to heart that such an act is worthy of such a penance.

I am quoted on the back cover:
“Hoffman has produced a highly readable translation of St Peter Damian's most famous work, with a scholarly and helpful commentary placing it into its historical context. As the Church once again confronts the consequences of a collapse of clerical sexual discipline, we do well to read St Peter's insistence on taking seriously the Church's early penitential tradition, and the Scriptural references which formed the foundation for this, as well as his zeal for the souls of both sinners and the victims of abuse. Hoffman has done a great service to his readers in preparing this edition.”

The publisher is offering a 15% discount on the book to Rorate Caeli readers, who can purchase the book by clicking here.