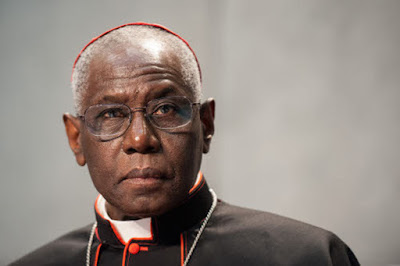 It it always interesting to see arguments about liturgical orientation, the priest 'facing east' in Mass, since this is an important characteristic of the Church's liturgical tradition. Cardinal Sarah mentions it in a list of things which might be done to make celebrations of the Ordinary Form more worthy, along with a greater use of Latin, kneeling, and the discouragement of photography. It is not exactly a full-dress treatment of the issue, and nor is it new. In his talk he refers back to an article he wrote for Ossovatore Romano and the work of Pope Benedict. He could equally have referred to the writings of Cardinal Schonborn, who is quoted in the FIUV Position Paper on Liturgical Orientation. In this particular talk, Cardinal Sarah throws it out as a nice idea:

This practice is permitted by current liturgical legislation. It is perfectly legitimate in the modern rite. Indeed, I think it is a very important step in ensuring that in our celebrations the Lord is truly at the centre. [Full text]

What is rather amazing, however, is the reaction to these remarks. Cardinal Nichols has written to his priests, the Vatican spokesman Fr Lombardi has made a statement, even Fr Spadaro SJ and Austen Ivereigh have felt the need to get in on the act: all with a view to contradicting the basic idea, that celebration facing east would be a good idea. Of course, they, like Cardinal Sarah, are all entitled to their opinions, and Cardinal Nichols is not just entitled, but obliged, to exercise prudential judgement in guiding his priests. The debate has been marred somewhat by a technical dispute over the correct translation of a passage in the General Instruction of the Roman Missal - this is the kind of tedious issue which those who are really interested can look up in a footnote in the Position Paper (see footnote 1). But let me say something about the bigger picture.

This debate is inevitable and intractable because both sides are right.


Cardinal Sarah, Pope Benedict, Cardinal Schonborn and Fr Michael Lang (in his book Turning Towards the Lord) are perfectly and undeniably correct that from a historical and theological perspective worship 'versus populum', facing the people, creates a problem. It doesn't invalidate the Mass or anything like that, but it is for practical purposes a massive rupture in historical continuity, for all the precedents which can be argued for it, and gives expression to a conception of the liturgy as (in the words of Pope Benedict) a 'closed circle', the community 'worshipping itself'.

Not only is this second point the impression gathered by those, like Pope Benedict, with an acute ear for what is going on in the liturgy, but it follows from what the supporters of vs. pop. celebration themselves say in its defence: that they want to engage face-to-face with the priest, that they prefer chairs-in-a-circle type celebrations, that they want to emphasise community, and so forth.

On the other hand, Cardinal Nichols, Fr Lombardi and the others are perfectly and undeniably correct that, for practical purposes, celebration vs. pop. is an integral part of the liturgical reform. Yes, celebrating the other way is allowed, as is celebrating in Latin. But in both cases the thrust of the post-conciliar documents is that these are things allowed for only in particular situations with particular justifications. For example, Latin is suggested for international gatherings. Celebration ad orientem is conceded, for example, where the altar cannot be moved away from the wall because of its historical or artistic value (see the Position Paper footnote 2).

Yes, it is true that the rubrics make reference to the priest turning around at certain points to face the people. (Fr Spadaro quoted one of these, apparently under the impression that it implied the celebrant faced the people all the time, when it does the opposite.) Well, they have to, if the concession is made that Mass can ever be celebrated ad orientem. And anyway, this is an amazingly weak argument. Just as--whatever Vatican II in Sacrosanctum Concilium said--Pope Paul VI told the world that the reform meant Mass in the vernacular, in the same way his big, media-event Mass to inaugurate the reformed Missal on the first Sunday of Advent 1969 was vs. pop.

Vs. pop. celebration is simply one aspect of a coherent programme of reforms which aimed at promoting a particular form of liturgical engagement. It goes with the use of easy-to-understand vernacular, the drastic reduction of the use of silent prayers by the celebrant, the replacement of the Church's musical patrimony with music the congregation can itself sing, the theological simplification of liturgical texts, and the shortening of lengthy ones. The multiplication of lay liturgical roles like readers and Eucharistic Ministers are a natural extension of the same idea. By all means let us discuss the success or failure of the project, by all means question the kind of participation being aimed at. But let's not pretend that there is a 'genuine reform', intended by some mysterious 'spirit of the Council', which comprises some of these elements and not others. They may not all have been mentioned in Sacrosanctum Concilium, and indeed official documents are in many instances in tension with each other, but they all pertain to a single conception of what liturgical participation means, and to this extent they stand and fall together.

Those attached to the kind of liturgical participation brought in by the post-Conciliar reforms see, with varying levels of explicitness, worship ad orientem as a major step away from those reforms: and they are correct to do so. This is why attempts to introduce ad orientem can cause civil war in parishes. And the danger of civil war is one reason, I have no doubt, that it stimulates such a rapid response from people like Cardinal Nichols and Fr Lombardi.

The organisers of the Sacra liturgica conference, aiming to show that the Reform of the Reform agenda is still alive and kicking, have succeeded in showing just the opposite. There is absolutely no future in trying to inch back the reform in the teeth of this kind of opposition, any more than the First World War could be won by waves of infantry charging machine guns in order to gain territory a hundred yards at a time.

As I have argued on this blog before, it is a far simpler and generally more pastoral way forward for priests to introduce the Traditional Mass into the parish schedule, than to go to war over ad orientem and all the other issues in the Novus Ordo. Since, as I have argued, celebration versus populum is problematic, I admire and support priests who make the change to ad orientem in the Ordinary Form. What I can't do is defend them against the kinds of arguments which will inevitably be brought against them: that what they are doing is contrary to thrust of the post-Conciliar reform. Because it is.

The turning around of the priest to greet the people during the Traditional Mass is itself an interesting topic, noted at the beginning of the Position Paper on the Kiss of Peace.