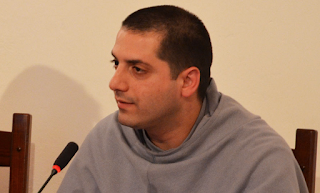 The Latin Mass Society is sponsoring a book launch in London for Fr Serafino Lanzetta's book: 20th July, from 6:30pm, in the basement of St Mary Moorfields, Eldon Street, London, concluding with Vespers at 8pm with the Schola Gregoriana of Cambridge.

It is open to all and free, but since we are providing refreshments please let us know you are coming: email info@lms.org.uk with 'Book launch' in the subject line.

Fr Lanzetta's book is being published in English for the first time, by Gracewing. Its translation into English was sponsored by the Latin Mass Society.

Below is a written interview with Fr Lanzetta about his book.

Vatican II, a pastoral Council
The Key-Problem of its Hermeneutics

Interview with Fr. Serafino M. Lanzetta about his latest work, “Vatican II: A Pastoral Council. Hermeneutics of Council Teaching”, with a foreword by Rt. Rev. Philip Egan, Gracewing 2016, 528 pp. (or. It. Il Vaticano II, un concilio pastorale. Ermeneutica delle dottrine conciliari, Siena 2014). This Interview appeared originally in French, for the Journal “Catholica” 125 (2014). The questions have been formulated by the same Journal.

Following the historical development of the idea of the council and its form (see the first chapter of my book), it is interesting to learn that it is not the juridical concept of “representation” (a council represents the Church) that defines a council in the strict sense – the conciliarists of the XIV century had mastered this concept in order to subordinate the Pope to the council – but rather the need, that was already felt at the first ecumenical council of Nicea, to defend the faith and to teach the truth: the greatest spiritual gift. The issue of a council has never been its infallibility, but the necessity to teach the truth.

Also those who see Vatican II as a break from Tradition, in my humble opinion, over-estimates the Council, dogmatising and infallibilising each of its doctrines, even those that are more dispositions or pastoral teachings relative to times, which were judged as new. If, in the judgement of some theologians, a solid biblical foundation is missing in order to establish, in the external forum, religious liberty as a foundation of a Christian State, from which “tolerance” towards the exercise of other religious cult is derived, how much more unsteady will such a biblical foundation be when one places all religions, because such, on the same level with regard to the exercise of cult in civil society, leaving to the laity the responsibility of announcing the Gospel to all?  Does the State no longer have any obligation towards God and the religio vera? I refer, to the example of positive religious liberty (exercised in the external forum) because it is one of the most debated subjects, whereas negative religious liberty remains biblically and traditionally clear (no matter of faith can be forced on someone’s conscience). This is one of the topics, perhaps the most heated, that requires like others, greater elasticity. It is necessary for Vatican II to be both read and interpreted for what it is, according to its mens, and not according to a personal (political) inclination towards the ecclesiastical right or left-wing, or a subjective sensitivity towards the conservative or progressive. Already in 1968 Dietrich von Hildebrand proved that a mere contraposition between conservatism and progressivism is simply sterile: the point is either truth or prevarication, the truth or a “spiritual house of cards”.

For this purpose, based on other studies that have been published along the same line, it has been my desire to interrogate the Council as such. I have sought to re-discover – as far as it has been granted to me and save for a better judgement – the mens of the Vatican on certain key doctrines. The theologian is interested in understanding above all, so as to move with surety, the grade of magisterial teaching of the doctrines that we have before us. Precisely because this is not always clear, it is necessary to have recourse to a systematic study of the Council’s sources. The grade of magisterial teaching to which corresponds a theological note and on the other hand, a theological censure – I re-engage the topic of notes and censures that are so indispensable to the theological discussion –, with which to indicate a doctrine, allows us to examine the conciliar doctrines in a sure way; and there, where one finds the need because dealing with doctrines not yet definitively taught, to also be able to indicate some suggestions for an organic dogmatic progress, realised in any case by the Church’s magisterium. Upon examining these doctrines, which are among the most important and significant in the whole magisterial structure: Scripture-Tradition, members of the Church/belonging to the Church, episcopal collegiality, the mystery of the Blessed Virgin Mary in Christ and in the Church, I have reached the conclusion that we find ourselves before truths to which could be attributed the following theological note: “sententiae ad fidem pertinentes”, that is doctrines “upon which magisterium has not yet pronounced itself definitively, whose negation could lead to placing other truths of the faith in danger and whose truth is guaranteed by their intimate connection with revelation” (see pp. 423-432 of my book). A subsequent dogmatic development would still be possible for these doctrines, to reach the grade “definitive tenenda” and higher still, to their proclamation as dogma of faith. For a fair number of theologians in Council, only the question of the “sacramentality of the episcopate” is a definitive doctrine. Also on this point, however, there is no unanimity.

The verification of the so-called “mens Sanctae Synodus” could be seen by some as a light-hearted or even dangerous exercise, since it is up to the Magisterium to justify itself. Such a cutting off however, would abolish the very being of theology and contradict the repeated invites of the Council’s General Secretariat to read the proposed doctrines from the conciliar magisterium (not dogmatically defined nor held definitively, which would not require any interpretation because self-explanatory and would therefore be clear) with the spirit of the Council itself, a spirit that can be deduced from the subject dealt with and from the manner of expression, in accordance with the norms of theological interpretation.

The distinctiveness of my work consists in the fact that, with the aim of faithfully interpreting these doctrines of the Council, I avail myself of numerous first-hand sources. The numerous expert reports of theologians of the Doctrinal Commission were of great importance to my work, and which in the hierarchy of fonts, are to be placed at a much higher level than personal diaries, following straight after the Synodal Acts. They constitute the most authentic testimonies of what the theological mind of the Council prepared for the discussions, modifying or improving them based on the Council discussions, accepting or not the so-called modi presented by the Fathers. It is not hard to find the theological theses of various experts of the majority positions within the Commission. To follow the discussion of the Doctrinal Commission step-by-step is of great epistemic help in order to correctly evaluate the discussions of the Fathers in session. The Fathers frequently depended on their theologians, but their theology did not always depend on the Church’s Tradition. This is also a factor that one must bear in mind, and that can settle, so I think, many discussions that are still open regarding the correct hermeneutics of the Second Vatican Council.


Serafino M. Lanzetta
Support the work of the LMS by becoming an 'Anniversary Supporter'.
Posted by Joseph Shaw at 10:00 am