Amoris laetitia and the Bishops of Buenos Aires 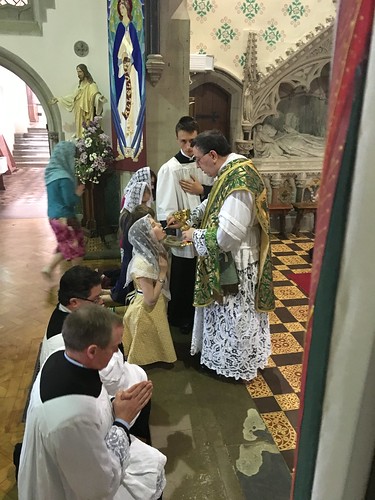 I'm coming late to the party on this news, but I feel the need to think this through a bit by setting the matter out in a blog post. Everything in this post is, obviously, my personal opinion for which I don't claim any particular authority.

The saga of the interpretation of Amoris laetitia took a step forward with the publication of a letter addressed to priests from the bishops of the pastoral area of Buenos Aires, and the arrival in the public domain, somehow, of Pope Francis' response to that letter. This was an enthusiastic endorsement: 'The document is very good and completely explains the meaning of Chapter VIII of Amoris Laetitia,' he told them, adding: 'There are no other interpretations.'

The choreography of the letter and the Pope's response in the media leaves little doubt that the Pope wishes this to be seen widely as the correct interpretation of Amoris laetitia. I don't say it is an 'authoritative' interpretation since the Pope's letter to the bishops does not look like a magisterial act. What it does do, all the same, is give us a clearer take on Pope Francis' personal view than we have had up until now.

The key passage of the Bishops' letter is as follows. The possibility of a couple in an illicit union living in continence, as brother and sister, has just been raised. The letter goes on:

6) In other, more complex cases, and when a declaration of nullity has not been obtained, the above mentioned option may not, in fact, be feasible. Nonetheless, a path of discernment is still possible. If it comes to be recognized that, in a specific case, there are limitations that mitigate responsibility and culpability (cf. 301-302), especially when a person believes they would incur a subsequent wrong by harming the children of the new union, Amoris Laetitia offers the possibility of access to the sacraments of Reconciliation and Eucharist (cf. footnotes 336 and 351). These sacraments, in turn, dispose the person to continue maturing and growing with the power of grace.

It goes on to say that this concession should not be understood as of general application, but must follow from discernment and so on, and that the admission to Holy Communion might best be done in private.

To understand the significance of this we need to refer back to the passages of Amoris which are referred to, and clarify some of the operative concepts.

Mortal sin drives out sanctifying grace, which makes it impossible to receive Communion fruitfully. As I have discussed here, paragraphs 301-5 of Amoris about mitigating circumstances explicitly rule out of consideration the type of mitigation which can make an objectively gravely wrong action compatible with a continuing life of grace: viz., those factors which would stop the action being a mortal sin.

To be a mortal sin, an objectively gravely wrong action must be done with full consent of the will and with knowledge of its gravity. We can set aside the possibility that carnal relations between a couple in an illicit union are never engaged in with full consent, as if they were always intoxicated, victims of torture, or under the thumb of a cruel blackmailer. (These things are possible, but are not what Amoris has in mind.) The question comes down to knowledge of the moral gravity of the act. On this, Amoris (301) declares:

A subject may know full well the rule, yet have great difficulty in understanding “its inherent values”

This is important because as I have noted, the key type of case is that of 'churchy' people, who want to receive Communion, be godparents, and be on the Parish Council; people who in Germany and Austria pay the Church Tax. They cannot be said to be ignorant of the law: they know it 'well'; on the other hand they do not, subjectively, feel motivated to follow it -- they don't see 'its inherent values'.

Now, it is precisely because this type of case cannot be understood except as a mortal sin, that it has caused the problems it has. A couple who appear publicly to be in an illicit union but have managed to free themselves from the permanent state of mortal sin by confession, and a firm purpose of living as brother and sister, can be given Communion in private, to avoid scandal to others. A person who, in the judgment of a confessor, has performed gravely wrong actions without full consent of the will or without knowledge of the gravity of the act, can be given absolution without a firm purpose of amendment, since he was never guilty of that particular mortal sin. These cases are not the problematic ones. The problematic case is that where the classical definition of mortal sin does apply, not one where it does not.

To take the matter forward we need to go beyond the text of Amoris, since the text does not, or at least not clearly, give us a solution to this problem. What we get is footnote 351, which appears in para 305, which I have discussed before. This says very simply that a person in an objective state of sin can be helped by the sacraments, which I took as a statement of the obvious. The sacraments exist to assist our salvation. The footnote says nothing about setting aside the normative conditions, set by Divine Law, for sacramental absolution or the fruitful reception of Communion. This, at any rate, was my 'pious' reading of the footnote in the light of the continuous teaching of the Church.

What the Argentine bishops have done is to take this reference to people being helped by the sacraments, in the context of a discussion of people in an on-going state of mortal sin (or: a subjective state which up to now would not allow a confessor to give absolution, or a pastor to give Communion even in private), and draw the conclusion that, since Amoris is telling us that such people should be helped by the sacraments, it follows that the rules (i.e. Divine Law) which govern the sacraments must be changed, or ignored, so that these individuals can receive the sacraments after all, without changing their own, subjective or objective, circumstances.

This of course is not new; it is the standard liberal interpretation of Amoris. What is new, or at least clearer than before, is that Pope Francis wants us to take this as the 'only interpretation' of Amoris. This fits in with his statement that Amoris makes a difference: it changes something. When asked if it did, he replied (on an aeroplane): 'I can say yes, period.' He then referred the assembled journalists to the interpretation of Cardinal Schönborn, who said, in an interview:

There is an evolution, clearly expressed by Pope Francis, in the Church’s perception of the elements that condition and that mitigate, elements that are special to our own epoch.

What the Argentine bishops' letter gives us is clear indication of exactly what the change is.

For the sake of completeness I should acknowledge that the supporters of the new discipline will say it is a matter of interpreting Divine Law, not changing it, and that Cardinal Schönborn made great play of the idea that the existing rules, in Canon Law and elsewhere, don't need to be changed because it was just a matter of realising that no rules could cover every case. These moves make no difference, however, since the perennial teaching of the Church, on such basic issues such as the nature of mortal sin, the Sixth Commandment, and the conditions for sacramental absolution, are perfectly clear and cover the disputed cases without any conceptual difficulties. It is precisely because these are not marginal cases that they can't be dealt with (to the satisfaction of those wanting change) using the resources of the existing rules and discipline, which has always allowed a role for the exercise of judgement by confessors and pastors, since the application of the law in hard cases is not a mechanical exercise.

We have here a difficult situation, to say the least, where at least a few points are clear.

1. As noted, the conditions under which a priest can absolve a penitent are set by Divine Law, since our Lord Jesus Christ established the sacrament and acts in it. No one seems to be suggesting that Confession be evaded, so this is a key sticking point. It is obvious that the Pope does not have the authority to change Divine Law.

4. Although it is clear that what the Pope has indicated, in this roundabout way, is not correct, and not compatible with the teaching of the Church, there would be several more steps to go before we could say that the Pope is a heretic. Being a heretic involves stubborn adherence to error after the error has been pointed out by people with the appropriate authority. A process of 'warning' by, say, the College of Cardinals, and a subsequent reiteration of the error on the part of the Pope, would rule out possible misunderstandings of what this or that passage really means, on the part of both sides, give the Pope the opportunity to clarify or recant, and so forth. Such a process is quite unimaginable in the present historical situation of the Church. It just isn't going to happen.

5. What is going to happen is that some people will follow these hints of Pope Francis, and some will not. Time will go by and Amoris will remain an unclear magisterial document, and private letters of the Pope and interviews by Cardinal Schönborn will remain the expressions of private views.

6. The intensifying conflict and confusion will cause incalculable harm to souls.

Anyone, incidentally, who thinks that I have a record of interpreting Pope Francis in a hostile may want to read this.