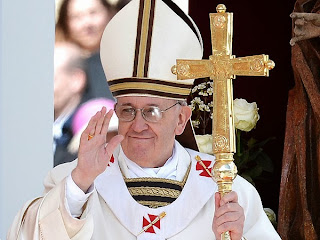 There is a flattering, though short, reference to this blog in the The Tablet this weekend, in the middle of a feature article about how Catholic conservatives and traditionalists are responding to Pope Francis, and particularly to the interviews he has been giving. Brendan McCarthy wrote:

Another English traditionalist blog, the Sensible Bond, has urged conservatives in the Church “to make a power play to get the Francis narrative under their control. [They] know he is using the liberal codes”. As if in response, Joseph Shaw, chairman of the Latin Mass Society, sought in an intriguing series of blogs to articulate how enthusiasts for the old rite could find common ground with Francis. He urged traditional Catholics to distance themselves from neoconservatives.

“We are not the ones who regard obedience as the only virtue, who think that the firm smack of discipline is the cure for all ills,” wrote Shaw, ridiculing the neoconservatives’ ultramontane enthusiasm for placing “enormous emphasis on the person of the Pope, seeking at all costs to endorse and live by even their non-Magisterial statements and philosophical preferences”.
It's not that I'm looking to accolades from liberals (and this is not exactly an accolade, anyway). I see this, rather, as vindication of my approach to Pope Francis, which consisted of separating what he had said from the interpretation of extreme liberals (since he doesn't think the Church's teaching is going to change), and from the trap conservative Catholics have got themselves into, by suggesting over the last two pontificates that loyal Catholics take every Pope's lightest word as the Divine Law. I've forced at least this Tablet journalist to give the distinctiveness of the traditional Catholic position a second glance.

You can see my series of posts on Pope Francis here.

(McCarthy misread the Sensible Bond, however: it didn't argue that conservatives should make a 'power play' to get control of the narrative, it observed that they had done so, and gave examples.)

I also posted about the interview Pope Francis gave to the atheist Eugenio Scalfari, and went so far as to say that a key, troubling proposition presented as a direct quotation of the Holy Father was, on closer examination, meaningless. It now seems that the interview has been pulled from the Vatican website and more or less repudiated. Certainly, we have been told quite clearly that no trust should be placed in the individual propositions purporting to be the Holy Father's words. They probably weren't.

There has, in fact, been a noticable change of tone in the Papal news feed. Pope Francis rang up a journalist who had not only criticised him but been sacked for doing so, and told him that he appreciated the criticism, which had been made with love, and which he needed. This, as they say, was pretty big of Pope Francis.

He has also just congratulated the Fraternity of St Peter on the anniversary of their foundation, and emphasised the value of their charism and mission.

In a letter to the theologian Archbishop Marchetto he congratulated the latter, a critic of the 'Bologna School' of theology (the one which sees Vatican II as Year Zero of the revolution), and not only implicitly supported the hermeneutic of continuity, but thanked the recipient, again, for useful criticisms:

You have made this love manifest in many ways, including correcting a mistake or imprecision on my part - and for that I thank you from the heart -, but above all it is manifest in all your purity in the studies made on the Second Vatican Council. I once told you, dear Abp. Marchetto, and I wish to repeat it today, that I consider you to be the best interpreter [ermeneuta] of the Second Vatican Council.

Now he has done it again, writing in a new document, a letter to Cardinal Brandmuller on the 450th anniversary of the Council of Trent, and referring to the 2005 Address in which Pope Benedict XVI set out his hermeneutic of continuity stall as Pope.

Graciously hearing the very same Holy Ghost, the Holy Church of our age, even now, continues to restore and meditate upon the most abundant doctrine of Trent. As a matter of fact, the “hermeneutic of renewal” (interpretatio renovationis) which Our Predecessor Benedict XVI explained in 2005 before the Roman Curia, refers not only to the Tridentine Council but also to the Vatican Council. The mode of interpretation, certainly, places one honourable characteristic of the Church in a brighter light that is given by the Same Lord (Benedict XVI): “She is a subject which increases in time and develops, yet always remaining the same, the one subject of the journeying People of God” (Christmas Address to the Roman Curia).

I wonder what the liberals are going to make of all this. I'm not proposing that traddies now put happy pills in their tea and start dancing the aisles, as the liberals have been doing the last few months. But perhaps a more balanced picture is beginning to emerge, of a Pope who - like everyone - is a complex individual, and who - uniquely - has a very complicated job to do, and who - most unusually - was very little known when he took the job up.

Let us continue to pray for him.
Posted by Joseph Shaw at 5:45 pm