'These excesses [French monarchism, the Order of St Lazarus] are fortunately peripheral in Britain, but we do see churches dedicated exclusively to the celebration of the Tridentine-rite liturgy which sometimes ignore strict prohibitions on the use of thrones and canopies, on the vesting of bishops in the sanctuary rather than in the sacristy, on the washing of a bishop's hands with Jeeves-like servants and on the continuing cult of non-existent saints such as Philomena, who has been banned from every calendar in the world, only to become a cult figure for the opponents of liturgical reform. The totems of opposition to post-conciliar Kingdom liturgy are erected in several places where Tridentine-rite liturgy is permitted, even here in Britain. Now hang on a minute. Under certain conditions, according to the 1962 books specified by the legislation governing the Extraordinary Form, bishops can vest in the sanctuary. Those are the rules. It is not 'strictly forbidden': that is a fantasy. Anyway, I though Loftus hated it when people insisted on rubrical exactness? Oh, only selectively. When it suits him, he uses imaginary liturgical legislation to attack some of our English bishops: shown here are Bishop McMahon of Nottingham, and Bishop Drainey of Middlesbrough. Are they dangerous extremists, Mgr? (The places these Masses are taking place, incidentally, are not even regularly used for the EF, let alone exclusively: the chapel of Ratcliffe College, and St Wilfrid's in York.)

But what's this about multiple churches where only the Traditional Mass is celebrated? I know of none: not one. (Loftus talks about it being 'permitted', so we are not talking about SSPX places of worship.) In SS Peter and Paul and St Philomena, where the Institute of Christ the King say Mass in the Wirral, the Ordinary Form is also celebrated once a week (on Fridays: look at their weekly newsletter). No other church in Britain comes close to this level of dedication to the EF: wherever else the EF is celebrated, it is in a church belonging to an standard Ordinary Form parish, with the exception of a handful of private chapels, inside the homes of priests belonging to the Traditional Priestly societies, or in the Orkneys belonging to the Sons of the Holy Holy Redeemer.

Many of the current difficulties with integrating the celebration of Tridentine-rite Masses into the overall liturgical jurisdiction of a diocesan bishop stem not from Summorum Pontificum itself but from the Ecclesia Dei Commission's application of it. For instance it has ruled that any priest may roam around the countryside seeking fellow-enthusiasts and with no other Eucharistic-community qualification, then demand to be allowed to celebrate a Trindentine-rite Mass in any church they choose. This is plainly nonsensical.


Here Loftus is presumably referring to the famous 'stable group' rule, which allows groups of those attached to the Traditional Mass to come together from different parishes, rather than ask for several Masses in several places. It seems quite sensible to me: and it is in the original legislation, Summorum Pontificum (Article 5); it's not something added later by the PCED.

The Commission's sometimes sententious decisions which then followed also inhibit the free discussion among the People of God which helps to build a liturgy, old-rite or new, which is sensitive to the needs of time and place. It is simply arrogant and unjust for altar-girls to be forbidden the Tridentine-rite Masses. More and more there is an unjustified presumption that Communion at such Masses may only be received kneeling and on the tongue.'

Clearly, if you took the 1962 books and applied to them all the changes which happened afterwards you'd end up with the Ordinary Form. What would be the point of that?

As far as the PCED is concerned, what Loftus needs to get over is the final article of Summorum Pontificum:

Art. 12.  The same Commission [sc. Ecclesia Dei], in addition to the faculties which it presently enjoys, will exercise the authority of the Holy See in ensuring the observance and application of these norms.

Tough luck, mate. Oh, and here's more tough luck. If you think that Pope Francis is going to conduct some kind of fanatical campaign against canopies, you're in for a disappointment. 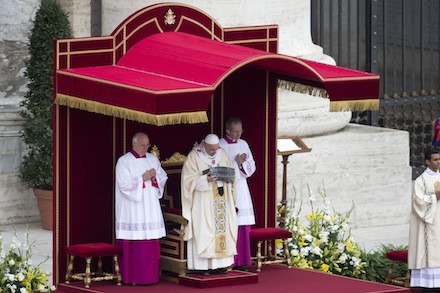