Oh to be proved wrong

When Gerhard Müller was appointed Prefect of the Congregation for the Doctrine of the Faith, Mgr Basil Loftus was on cloud nine. Archbishop Müller was criticised by some conservatives for things he had written in a work of speculative theology only available in German. Such criticisms were ambrosia to our good Monsignor.

On the 8 July 2012, he gave his assessment of where the critics were going wrong. ‘Quite simply, he [Archbishop Müller] is profoundly scholarly and spiritual, and they [his critics] are not.’

If only life were so simple. A year and a week later, after Archbishop Müller came out strongly against changing the Church's discipline to allow divorced and re-married Catholics (unrepentant ones, that is) to receive Holy Communion, Loftus changed his tune.

He wrote, on 14 July 2013: ‘Quite honestly, if the Congregation of the Doctrine of the Faith, of which he is Prefect, sees its roles as setting limits to God’s Mercy, then it is not fit for purpose.’

Loftus doesn't burden his readers with the fact that this represents a complete turnaround. But there are a couple of things we can learn from this debacle.

I don't mean that Loftus is fallible. We knew that already. 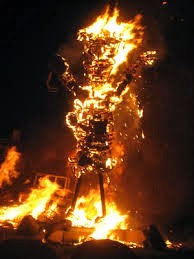 Müller was never like Loftus. His views on the Virgin Birth may be controversial, but - as far as I know - they were contributions to a theological debate, not published in a newspaper available to the Faithful at the back of church. Part of the picture we had of Müller from the start was his opposition to radical dissident groups like 'We Are Church'. Loftus' euphoria blinded him to this.

Müller is now going to be tarred and feathered, like so many of his predecessors in his office, by extreme progressives, as a stick-in-the-mud. His nuanced view of the Virgin Birth is going to be irrelevant. With the burning of Pope Francis in effigy by feminists in Argentina, we are beginning to see the same thing happening to him.

Sadly for the likes of Mgr Loftus, Müller is, fundamentally, a Catholic. And so is Pope Francis. He shouldn't be surprised. But he will be.
Posted by Joseph Shaw at 9:09 pm