Two Masses for All Souls Yesterday I attended two Sung Traditional Masses for All Souls, one in Milton Manor, in the morning, and one in the Catholic Chaplaincy of Oxford University. Mass in Milton Manor was celebrated by Fr John Hunwicke of the Ordinariate, and accompanied by the Schola Abelis and the Newman Consort (chant and polyphony respectively), and the small chapel was full, with about 40 people in attendance in total. We sang from an interesting choir loft, a sort of room with windows opening into the chapel. The superb 'Strawbery Hill Gothic' chapel will be celebrating the 250th Anniversary of its dedication next year. We managed to arrange a catafalque so we could have the Absolutions at the end of Mass. These are the prayers, and sprinkling with Holy Water and Incensing, which is given to the coffin in a Funeral, which can be given in the absence of a body by an empty catafalque to represent it. For All Souls, it represents all the Souls of the Faithful Departed. In the Chaplaincy, Fr Daniel Seward of the Oxford Oratory celebrated the first public Sung Mass in the Extraordinary Form ever, in the Chapel of St Thomas More (which is a modern chapel). It was attended by fifty people, mostly students of course, and accompanied with Chant and Polyphony by a small group of student singers. I am delighted that the Extraordinary Form has in this way taken its place in the liturgical life of the Oxford Catholic Chaplaincy. Thanks are due to Fr Simon Bishop SJ, the University Catholic Chaplain, for facilitating this Mass. 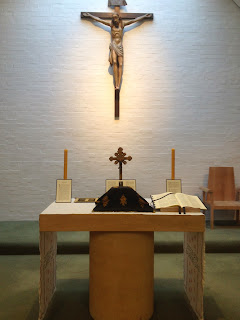 I didn't take any photographs of the Mass but this image of the Altar some time before Mass started has a great symbolic value. This Extraordinary Form of the Roman Rite is celebrated at this Altar.
Posted by Joseph Shaw at 10:00 am