What can he mean?

"Each of us has a vision of good and of evil. We have to encourage people to move towards what they think is Good."

"... Everyone has his own idea of good and evil and must choose to follow the good and fight evil as he conceives them. That would be enough to make the world a better place."

If we want to understand what someone is saying, it is a good idea to use the charitable assumption - which is also a rational assumption - that it isn't completely loopy. At least, from the point of view of the person speaking.

If Pope Francis is taken as saying that, seeing that each person has a view of the good, we should help each person to achieve what each person wants to achieve, without further qualification, this would be completely loopy. It would just lead to this. 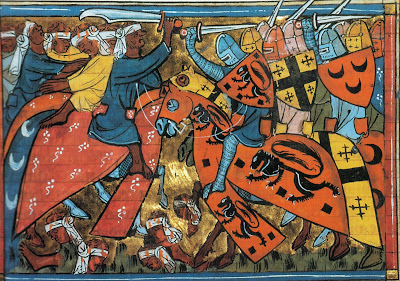 It seems fair to assume that each side in the Crusades, as in most wars, were 'moving towards what they thought of as Good', and indeed moving with commendable vigour. But the resultant bloodshed was not something we should be promoting.

It is perfectly obvious that this isn't what the Holy Father had in mind. Nor would he approve, say, assisting the Nazis to achieve their goal, which they regarded as good, of a Jew-free Europe, or Lenin's goal of strangling the last king with the guts of the last priest, and so on and so forth.

Since he didn't mean that, what did he mean? There must be some implicit assumptions which limit the scope of the notion of 'good'. For example, on the Catholic assumption that Natural Law is written on our hearts, or even on the less substantial Aristotelian assumption that all men seek happiness, what we (really, truly, deeply) think is good is the real good, and not a false good. Aristotle said that those seeking happiness in something degraded or immoral were trying to use a flawed means to get to the genuine good (the happiness which would satisfy all their desires). St Thomas Aquinas said that you can never convince yourself completely that something degraded or immoral was the real good, there would always be the little voice of Natural Law nagging you that this wasn't right, so in a broad sense immoral action (leaving aside misunderstandings and ignorance) was never rational or fully conscientious. The wicked always act against their conscience.

These kinds of views are, of course, completely at home in the Catholic tradition, so it would not be surprising at all if the Pope agreed with this - quite the opposite. So what he might be saying is: we should be encouraging people to seek the true good, regardless of what they think they think is the good, because what they really think is the good is the true good.

This kind of view is, of course, compatible with a pretty robust approach to getting people to adopt and remain in the Catholic Faith. Now we can be pretty sure he didn't mean that either. Again, this would be a matter of attributing to him various assumptions about religious freedom, prudence, and the Geneva Convention on Torture, which it is eminently plausible that he holds.

Of course he doesn't mention these assumptions in the interview, any more than he mentions the first set of assumptions.

The most we can really be sure about is that what he meant falls somewhere in the logical space between:

Proposition 1: We should help people to achieve what they want, however degraded or immoral that is, even if it involves killing the innocent, torturing people etc..

Proposition 2: We should get people to embrace the true Good, revealed to us (and to them) by Natural Law and Divine Revelation, even if that involves killing the innocent, torturing people etc..

The limits on what he might mean that I have just given derive entirely from the assumptions I have (charitably and rationally) attributed to the Holy Father, and not to the words he actually spoke. So what exactly do these sentences in the interview reveal about the Holy Father's thoughts?

Attempts to place him at a specific point along the spectrum of opinion are likely to turn into eisegesis: reading into him what we want to see. If other statements of his are clearer, well let's look at those instead. Tying oneself into knots to give a 'conservative' interpretation, or getting carried away with a loopy liberal one, is no use to anyone.

One thing I can conclude: that it is compatible with the respect due to the Holy Father's exalted Office to suggest that these interviews are generating more heat than light.
Posted by Joseph Shaw at 10:00 am