Pope Francis on ideology, and some Catholic cartoons 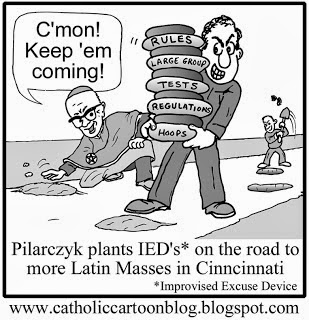 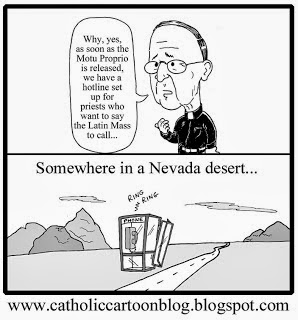 Yesterday Pope Francis spoke again about the danger of making the Faith an 'ideology'. Here's a passage from a typical report.


It is, he said, “the image of those Christians who have the key in their hand, but take it away, without opening the door,” and who “keep the door closed.”
Asking those present how a Christian is able to fall into this attitude, the Pope reflected that “The faith passes, so to speak, through a distiller and becomes ideology. And ideology does not beckon (people).”
Noting that it is a “lack of Christian witness does this,” he stressed that “when this Christian is a priest, a bishop or a Pope it is worse.”
“When a Christian becomes a disciple of ideology,” urged the Pope, “he has lost the faith: he is no longer a disciple of Jesus, he is a disciple of this attitude of thought,” and “the knowledge of Jesus is transformed into an ideological and also moralistic knowledge.”
“Ideology frightens, ideology chases away the people,” he stressed, stating that it is because of this that many are distanced from the Church. 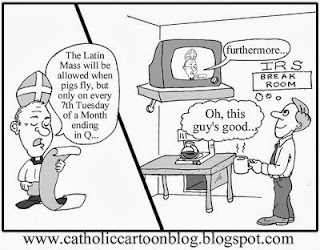 I think I know what the Holy Father means. we Traditionalists have been the victims of this attitude many times. The guys at the Catholic Cartoon Blog, to whom I owe these cartoons, were not saying something incomprehensible when they drew these, we all looked at them and smiled to ourselves, oh yes we've seen that! 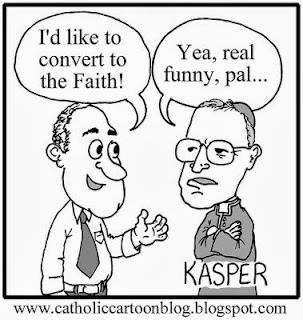 And then there are the priests who have, over the years, refused to allow the Traditional Requiem to the grieving relatives of a deceased Catholic who requested it. Those who have refused Holy Communion to a Catholic who kneels for it. Those who get angry with penitents in Confession who ask for a valid formula of absolution. And those who fob off people seeking to convert to Catholicism. Well, we can argue about what Cardinal Kasper really meant in this or that speech, but in pastoral practice some of the nuances can get lost.

Yes, we all know about priests and bishops who have the key to the door and take it away, those who insist on pettifogging rules and policies rather than responding with apostolic charity to our requests.

It may be that liberals will say I'm reading Pope Francis upsidedown, isn't he talking about 'moralistic' types, and isn't that code for conservatives? Seriously, look at the contrast here: between moralism on the one hand, and on the other hand prayer. Who are the people who for a century and more have been telling us that the Faith is not about the supernatural, about an encounter with God in prayer, including liturgical prayer, but is instead about ethics? Step forward every liberal biblical critic you've ever heard of, starting from Kant. How does the Holy Father's words fit into that? The attitude that 'what's important' in the Church is not what we do on our knees, but the implementation of elaborate and impersonal programmes to improve the world, has been a cancer in the Church.

This is a serious problem for the liberals who want to instrumentalise the present pontificate. Pope Francis' proposed solution to the moralism isn't to change the teaching of the Church: unlike the liberals, he knows this is impossible. It is to pray.

Well, Mr Liberal, if you want to follow the Pope, you're going to have to allow us to pray.
Posted by Joseph Shaw at 10:26 am