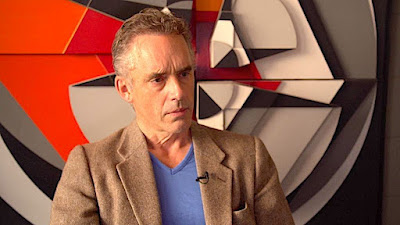 There is a practical and a theoretical aspect to his work. The practical stuff is about how self-discipline and an aspiration to objective value is necessary to have a decent life, in combination with a refusal to go along with a number of politically correct ideas. This is underpinned by the theoretical aspect of his thinking. What I've seen of this can be summarised, very crudely, as 'Jung meets evolutionary biology', and it is this which I want to talk about here.

Jungians take mythology and religion very seriously as psychological phenomena: they regard mythical and religious stories and world-views as embedding deep truths about human traits and the human condition. This YouTube video of Peterson's about the Easter message shows how he does it. Thus, human socialisation involves establishing a reputation for generosity and engaging in reciprocity, and this can be taken to a higher level in sacrificing things in the present for the future. This can in turn be represented in terms of sacrificing things for the sake God, in the hope that God will be good to us in the future. This kind of psychologising interpretation can be applied across the Bible and indeed to other religious traditions.

The dangers with this should be obvious. It is simply indifferent to the historical basis of the stories. It equally says nothing about the metaphysical reality of the actors in these stories: i.e., whether God actually exists. It represents an open invitation to distort the Christian message for the sake of shoe-horning it into a favoured psychological theory: Jung himself famously interpreted the newly-proclaimed Dogma of the Assumption as raising Our Lady to membership of the Blessed Trinity. And it consistently leaves out the operation of grace: as Alastair Roberts points out, it is Pelagian. Unless you commit yourself to God being a real actor in the human story, you can't expect Him to intervene to help you out, even in the subtlest ways.

On the other hand, it is nice to hear someone talking about Biblical ideas with interest and respect, and by no means is all of the genuine message lost in Peterson's retelling. The mere fact that the Bible is being brought into the conversation is a huge opportunity for the Church, and we must be ready to engage with the interest Peterson arouses and correct what needs to be corrected. One of the interesting aspects of this is that Peterson's quest for his own brand of psychological insights leads him away from a historical-critical or liberal interpretation. Thus, when God asks Abraham to sacrifice Isaac, Peterson is not concerned to explain this away or ignore it. He says, rather: well, the real world is like that, isn't it? Sometimes you have to sacrifice what you are most attached to.

What Peterson is doing goes back to Kant, who looked for moral allegories in Scripture. Christ is the Ideal Man and so on. Kant's approach influenced the liberal tradition of interpretation which claims that brotherly love and the Golden Rule comprise the 'real message' of Jesus, and not any of that stuff about being God or sacrificial offerings. Peterson's interpretation is different, because his own moral outlook is different: and maybe because he's a bit more sensitive towards the authentic message of the Bible.

The Jungian stuff is, of course, also far from new, and one thing readers should be aware of is the weaknesses of Jungianism as a psychological model. Jung's standards of clinical research were abysmal, and if Freud's conclusions were sped by his cocaine habit, Jung tried to confirm his conclusions by dabbling in the occult. Both Freud and Jung made the fatal error of assuming that other people's psychologies were like their own, as Dr Pravin Thevasathan has pointed out in his CTS booklet on mental health.

Again, Modern students of mythology are prone to dismiss the whole whole world of psychological interpretation, which includes J. G. Frazer's Golden Bough, Joseph Campbell, T.S. Eliot, and Robert Bly, as being too dependent on selective reading and wishful thinking: they only find patterns by ignoring the bits which don't fit. The putative psychological insights, of course, must stand or fall on their own merits.

A related weakness of Jung is the theory of the collective unconscious. This is the idea that we all have similar or identical ideas at the backs of our minds, of the king and the witch and the mother and the dragon and what not, and it is not that these derive from experience and story-telling, but that the experience and story-telling are explained in large part by these 'architypes' already in our minds. Put explicitly this sounds pretty ludicrous, and so indeed it is. It ignores cultural differences, for one thing; more fundamentally, there is no mechanism for such ideas to be passed on from one generation to another, except by teaching.

To hear Peterson and other Jungians talking about first the development and then the mysterious passing on of complex cultural artifacts, such as the idea of the hero, is ultimately to listen to a fairy-tale.

But here, Peterson hopes, evolutionary biology can come to the rescue, at least in some part, by its claim that patterns of behaviour, as well as the length of our legs or the size of our brains, have been honed and developed by the demands of survival over thousands of generations. At this point Catholic readers shouldn't be too frightened off by the idea of the evolution of human nature, problematic though that can certainly be, because the role this idea has in the argument for present purposes is simply to reaffirm that there is such a thing as human nature. People are not just organic machines which can be programmed in infinitely many ways. No: we have instincts and aspirations built in, and there are therefore certain ways of living which work, which lead to happy individuals and communities, and others which just don't. Among the ways of living which are simply hard-wired into human nature, on this view, are some pretty old-fashioned thoughts about gender roles and - a particular theme of Peterson - social hierarchy.

So Peterson's Jungian psychology, turbo-charged with evolutionary psychology, is a friend of social conservatism. It reaffirms the importance of the stories, myths and rituals of our religion and culture. It underpins traditional models of the family and society. It teaches that traditional morality, self-restraint and self-sacrifice have value. In all cases the value these things are said to have is ultimately value for the self: for mental health, for happiness. One could see it as a kind of Aristotelianism, a civilised morality of virtue and happiness. All the time, the truth of our religious claims is left hanging. Peterson is an agnostic. But worse than that, the Jungian and other influences he exhibits prompt him to place meaning ahead of the outside world. Meaning is imposed on reality: this isn't subjectivism, however, because we are all imposing the same meaning, or at least something sufficiently similar, because of our shared human nature/ Jungian architypes/ evolutionary behaviour patterns.

Ultimately, Peterson and his disciples are trapped in a universe whose meaningfullness is, or could very easily be, the product of collective fantasy, perhaps driven by the imperatives of the evolutionary struggle. This may seem preferable to a universe whose lack of meaning is laid starkly bare, as it is for too many young people growing up without religion or culture. But it is a lot closer to it than may at first be apparent.