The episcopal crisis comes to England 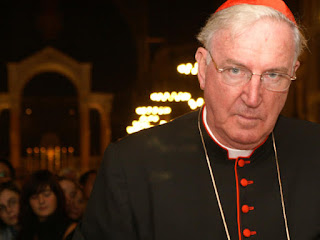 We all knew about Fr Hill, the priest-abuser of Gatwick Airport, long ago; we learnt about Bishop Kieran Conry more recently. One of the links between the cases is the involvement of the late Cardinal Murphy-O'Connor, who moved Fr Hill to fresh pastures after earlier victims came forward, and promoted Bishop Conry's career. In both cases he was only doing what most bishops seemed to be doing: giving abusers new opportunities for abuse and seeing priests clouded by questions about their chastity as ideal candidates for promotion: that was just what happened in the 1970s, '80s, and '90s, isn't it? Remember that Bishop Kieran was chosen by the Bishops' Conference to be head of their catechetical initiatives and 'Bishop for Youth'. (The official website summary of his career somehow neglects to mention his extra-curricular activities.) He must have had the support of a lot of other bishops as well.

But now further allegations have surfaced. They are focused around Cardinal Murphy-O'Connor and the Hill case but the implications draw in a number of other people in England and in Rome, including Pope Francis. Cardinal Murphy-O'Connor's reputation is of less importance than that of these others, who are still in office. The central contention is that abuse accusations against the Cardinal himself were not investigated, despite the Bishops' Conference's adoption of the policy of investigating every allegation. The problem now becomes not so much whether a dead Cardinal engaged in abuse in the 1970s, but whether various living individuals failed to follow their own protocols for investigating allegations. This question is in principle much easier to answer, and it is an important one: it is ultimately the question of credibility and moral integrity of the bishops, the question which is now overwhelming the Catholic Church in America.

It is perhaps too much to hope that the Rome side of the story be cleared up, but there is a paper trail in filing-cabinets all around England which could tell us if the claims about the behaviour of the English actors in this drama are true. If the Bishops of England and Wales have any sense, they will settle the matter publicly, taking any necessary bad-publicity hit right away, and not allow the issue to fester.

It may not have been picked up by the mainstream press here yet, but I don't think it is simply going to go away.

Support the work of the LMS by becoming an 'Anniversary Supporter'.
Posted by Joseph Shaw at 11:39 am