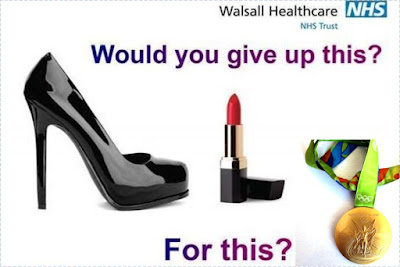 It has stimulated me to produce some memes of my own, which I include here; the original version was contrasting the shoe-n-lipstick combination with a baby's dummy.


It is offensive to feminists, because it makes use of a stereotype of women: it suggests that they are motivated by what is represented by the shoe and lipstick. They stand for 'fun', presumably: the fun a woman can have most easily when unencumbered by pregnancy or a dependent child.


On this, the feminists are correct: the implication that women are primarily motivated by that kind of fun is indeed offensive, because that kind of fun is not regarded as anyone serious as of serious value. I suppose the people who commissioned the posters thought of themselves as addressing the sub-section of women who really are motivated in that way, which, they think, at least overlaps with the subgroup who might have a baby, probably outside any kind of stable relationship, either as the result of contraceptive incompetence or contraceptive failure, or as a deliberate life-style choice. 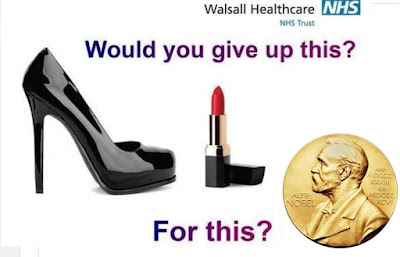 The problem is that when you plaster such posters all over public transport then people are going to be offended by the idea that they might fall into this category of potential feckless mother.

But another group of people have been offended as well, for the opposite reason: not because they they don't want to be categorised as having a heels-n-lipstick lifestyle, but because, as mothers or potential mothers, they do want to be in that category. They are offended by the idea that motherhood is incompatible with the heels-n-lipstick life, because they are motivated by what that represents.

This seems a bit strange, but they are interpreting the heels and lipstick symbolism in a somewhat broader way than the feminists, or indeed than was intended by the people behind the poster. So I've seen a lot of people on social media saying 'Let's have both!' For them alternative to 'skyscraper' high heels and bright red lipstick is the stereotypical frumpy mother who has 'let herself go'.

It may take more thinking-time than is generally available to people responding to headlines on social media, but still not very much, to realise that the original poster is not principally addressed to married women in their thirties and forties who like to dress up for the opera. Those aren't the women one expects to see in a queue for 'emergency contraception'. The heels and lipstick themselves may only be subtly different, but the wearers are of a very different stripe. The target audience of these posters are members of the UK's famous class of heavy-drinking, promiscuous clubbers. Right to Life UK refers to the 'narcissistic hedonism, and psychotic selfishness' of the pro-death industry, and that is perfectly correct.

Walsall NHS Trust is in danger, the feminists correctly think, of talking down to women: of assuming that they are all of this type. The problem arises from the Trust's attempt to talk at the level of people of mind-bogglingly vapid and sordid desires and aspirations. 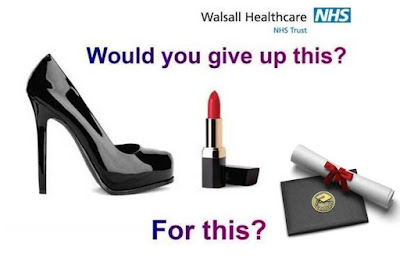 But here's a third group of people who are, or should be, offended: people who do not spend the working week calculating how many bottles of vodka they can drink over the weekend, but people who have ambitions of a higher order. This is because what happens when you try to appeal to the aspirations of people with ignoble aspirations is to endorse those aspirations. These posters do not say to these wretched women -- and men, apparently, who can only think of playing video-games -- that they might discover a more deeply fulfilling form of life if they exercised a modicum of self-discipline, some fraction of satisfaction-deferral, and thought about anything -- I mean anything -- which could plausibly be regarded as of real value. I don't think money gives you happiness, but I think a little medium-term financial aspiration for this group of people would be a huge improvement on what they have right now. If they took an interest in literature, or art, or religion... but I suppose that is unimaginable. No, the poster says, keep your eyes on that vodka.

But you know there is one thing which they might, at some point, make the miserable targets of this poster lift their eyes above the level of the next sexual, alcoholic or pharmacological experience. There is one thing that might, at a certain stage in their lives, turn them into human beings who care about something other that themselves. 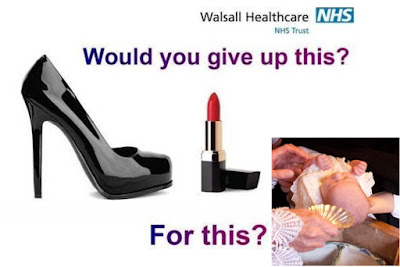 The way they do it is to say that parenthood is the less good option by comparison with the most depraved and empty lifestyle that human history has yet come up with. And that, of course, has implications for everyone who has chosen parenthood, a choice which is, at least for any sane person, incompatible with the Bacchic excesses of the British yobette. The NHS thinks you'd be better off getting hammered every Saturday night and going to bed with a total stranger: having made a careful mental note, of course, of the availability of emergency contraception.

So yes, we should be offended too: not only, like the feminists, for the implicit idea that all women are primarily motivated by high heels and lipstick, but because the posters are trying to persuade us that such motivation is preferable to the modicum of selflessness which motherhood tends to bring, and the objective value of bringing a child into the world.