Reflections on the CDF statement on blessings of homosexual unions

Last October a film was released which included a clip of Pope Francis saying, of homosexual persons, “they are children of God and have a right to a family. Nobody should be thrown out or made miserable over it. What we have to create is a civil union law. That way they are legally covered.”

BBC Radio 4 asked me to say something about the story when it broke. It turned out that I was to be a “conservative” Catholic voice, to be followed immediately by a “liberal” one, to whit the former Editor of the liberal British Catholic weekly, The Tablet, Catherine Pepinster. The BBC journalists were very excited about the Pope’s statement, and thought it presaged a substantive change of Catholic teaching. I happened to be in Rome at that moment, and from my hotel room I tried to calm them down. The big concession the Pope was making, I said, was the very fact that he had said what he had said. He was not about to change the teaching of the Church about sex outside (heterosexual) marriage. His words were designed, not to ready conservative Catholics for such a change, but to console those who are not reconciled to the teaching.

No doubt to the disappointment of the BBC journalists, Catherine Pepinster agreed with me.

We have been vindicated, now, by a statement from the Congregation for the Doctrine of the Faith, setting out the position that the Church does not have the power to bless same-sex unions. The document emphasises that Pope Francis “gave his assent to the publication of the above-mentioned Responsum ad dubium”. It seems that he is in favour of homosexual couples having the legal protections offered by the status of Civil Partnership, but insofar as their relationship (as the CDF says) “involve[s] sexual activity outside of marriage (i.e., outside the indissoluble union of a man and a woman open in itself to the transmission of life)”, then it cannot receive the blessing of the Church. When relationships are blessed, “it is necessary that what is blessed be objectively and positively ordered to receive and express grace, according to the designs of God inscribed in creation, and fully revealed by Christ the Lord.”

Since then Pope Francis has made some qualifying, informal remarks: or possibly not. And the whole media circus goes round again, with rival interpretations and the rest. In the mean time, we’ve just had the bizarre banning of the celebration of (almost all) private Masses in the Vatican basilica. A coincidence, no doubt, but nothing emanating from the Holy See seems to lack a counter-weight, something for the other side of the debate to cheer. Everything is balanced and qualified, obscured by clarifications, and then replaced in the spotlight by the next media-circus act.

This is not just Pope Francis; it is a longer-term feature of the Vatican’s relationship with the media. (Remember Pope Benedict and the condoms?) In order not to go crazy watching the Barque of St Peter apparently tacking wildly in one direction and then another, it is useful to hang on to the distinction Catherine Pepinster and I ended up agreeing one. As Shakespeare’s Henry VIII, about to trash the wretched Cardinal Wolsey, remarks, “words are no deeds.” 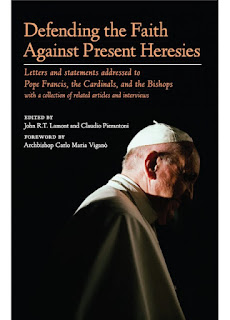 As with the issues raised with Amoris Laetitia, one might think that what Pope Francis says is in tension with the teaching, or even flatly incompatible with it, but as with so much over the last fifty years, these words are no deeds. They are intended to change the way people understand the doctrine, or even to distract attention from it, but not to change it. Some of the “pastoral guidelines” on couples living in illicit unions appear to create a situation in which the teaching is relegated to an abstract plane with no connection with reality: but they don’t come out and say the teaching is wrong.

I'm not saying these words are without significance. On the contrary, the resulting pattern of words and actions almost suggests that the teaching of the Church on these fundamental issues is a kind of immovable rock inconveniently in the way of dealing effectively with various delicate pastoral situations, which must therefore somehow be circumvented. It is as if one should say: if only divorce and remarriage were possible; if only gay marriage were possible. They aren’t, so let’s give everyone Holy Communion, and ignore the problem. In this way Pope Francis rejects calls to change the teaching, and equally rejects calls to treat the teaching as the life-giving basis of pastoral policy: something to be positively proclaimed and lived by.

The logical conclusion of all this is a picture of the Church labouring under the arbitrary demands of an irrational God, who has to be mollified by keeping certain obscure formulas in the Catechism, but in every other way can be worked around or ignored. This picture, of course, is as contrary to the theological vision of theological conservatives as it is to theological liberals.

Pope Francis' middle way may not be enough to prevent the German Bishops going into schism, and it has not been enough to stop many orthodox pastors and academics (myself included) from protesting, and from criticising Pope Francis, as is set out conveniently in a new book, Defending the Faith, edited by John Lamont. Perhaps Pope Francis will go down in history as the Pope who attempted an impossible balancing-act. It is to be hoped, at least, that his successors learn from this papacy.