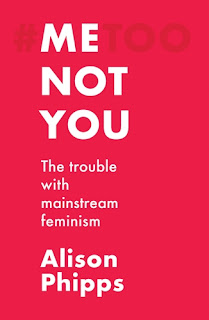 Most people are blissfully unaware of the vast extent of intellectual fakery which inhabits universities around the world. The fact that a great deal of it is paid for by taxpayers is bad enough, but sometimes it rises to levels which raise a different kind of question. This is the case with this article by Alison Phipps, Professor of Gender Studies at Sussex University. She shares this institution with the ‘Gender Critical’ feminist Kathleen Stock whom I wrote about here, but describes her colleague’s views, such as that women should not have share refuges with biological males, as beneath debate (“‘Reasonable debate’ cannot counter unreasonable ideas.”). In the article, Phipps writes that women expressing trauma about sexual violation, a phenomenon she describes as “white tears”, is a tool of oppression.
It is difficult to find words to do justice to the outrageous nature of this claim, and its calamitous consequences if taken seriously. But these are not the ravings of a lone madwoman. Phipps is a professor at a serious university, these reflections of hers are published in a mainstream journal, and she has also published a book on the same theme, with Manchester University Press. More significantly, she is one of many radical feminists of the new school. Put “white tears” (with quotation marks) into Twitter’s search bar, and say hello to a truly grim new world.

Phipps’ central idea is summed up in the title of her book: “Me Not You”. In the cover design these words are superimposed on the words “Me Too”. The idea is that when a woman complains about being raped, as happened with the “MeToo” movement, she is drawing attention to her own suffering, and therefore drawing attention away from the suffering of others. If she is relatively privileged, this is an act of oppression against those less privileged than her, who are thereby silenced.

It is a very strange argument. It is certainly true that when a more “privileged” person is the victim of abuse or injustice, he or she has an opportunity to fight back which other victims may lack. All kinds of resources, contacts, legal assistance and so on may be available to such a victim. Again, an abuser so bold as to tackle a Hollywood star, for example, will almost certainly have been abusing less well-connected victims. Is this a reason for the star to ignore the abuse and remain silent? Of course not. When the most well-resourced victims, the ones with least to fear, finally turned on Harvey Weinstein, they did what many other victims could not so easily do: they brought his abuse to an end.

As a matter of fact, even very humble victims of abuse can sometimes be successful. The gilded career of Dominique Strauss-Kahn, then head of the International Monetary Fund, was shipwrecked by a New York hotel maid. (The criminal prosecution was dropped but he settled a civil suit out of court.) As so often happens, when the appearance of vulnerability is diminished, other victims come forward. In one sense it doesn’t matter who is the first victim to take the plunge with a formal accusation, but I bet the poorer, more isolated, and less well-advised ones fervently hope that the way will be cleared by someone with the best possible chance of success.

Indeed, I would say that to make an accusation can in certain circumstances be a public duty, and this is a duty particularly incumbent on the most privileged. If an abuser can silence even them, then he is truly invulnerable. Many victims of abuse are plagued with the worry that they won’t be believed, but someone whose social status gives them credibility can make the testimony of other victims’ more credible.

In Phipp’s world view, one might imagine that there is a limited amount of outrage to go round, but the “MeToo” movement showed, on the contrary, how outrage can magnify itself: the more outrage is generated, the more, in some cases, there is left over for others. It is certainly not a zero-sum game.

What are the practical implications of Phipps’ view? That those considering complaining about any kind of bad treatment should “check their privilege” and remain silent if they decide that they lack status in the inverted hierarchy of victimhood, which is conceived of at least in part in racial terms. This is not an inversion of the view she is attacking: she is actually doing the same thing as she accuses others of doing: namely, of determining, by reference to an arbitrary and racially-aligned set of criteria, who is to be allowed justice, and who should continue to suffer exploitation and abuse in silence.

In her world, it is to be women, above all, whose abuse will be tolerated, and whose suffering ignored. This is the woke Feminism of the 21 st century, whose advice to women seems to be “suck it up, buttercup”.