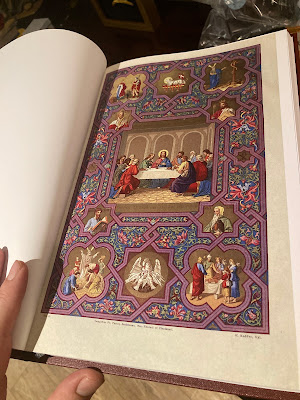 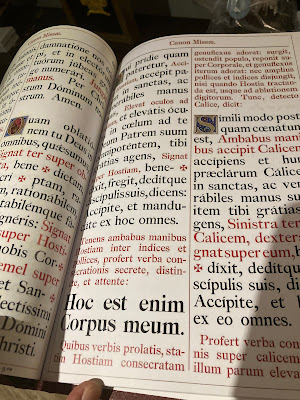 You can buy this here from the Latin Mass Society's online shop, which dispatches all over the world. Just in time for Christmas: for the bishop in your life?
The Latin Mass Society is proud to present a photographic reproduction of the 1889 edition of the Canon Missae ad usum Episcoporum ac Preletorum solemniter et private celebrantium, know as the Canon Pontificale or Pontifical Canon.
This is a very handsome presentation of the main texts of the Mass, with illuminated capitals, full-colour picture pages, and large font, particularly for the Canon itself, which will be of particular benefit to readers with poor eyesight. These features are unfortunately not found with the 1962 edition of the Canon Pontificale.

The Canon Pontificale contains the prayers said at the Altar, from the Aufer a nobis (which follows the Preparatory Prayers) to the Last Gospel, but not the Proper Prayers and Lections. This makes it a slim volume of about 120 pages, intended for the use of Bishops.

It also contains the text of the Rite of Confirmation, the Blessing of a Chalice, and a few other things, such as prayers for use by the celebrant in preparation for Mass and in thanksgiving after it.
We have added, as an appendix to this edition, the Prefaces added to the Roman Missal in the early 20th century: for the Sacred Heart, Christ the King, St Joseph, and of the Dead. These are formatted to correspond to the Prefaces in the main text, both with and without musical notation. The reprint concludes with a Note from the Latin Mass Society explaining the textual differences between this edition and the 1962 one.
This reprint has been made with a hand-sewn binding, so it stays open easily and will last for many years. It has a sturdy hard cover with a gold-blocked title on the front and spine, and two reading ribbons. It does not have finger tabs.
See the product page on the LMS online shop here. 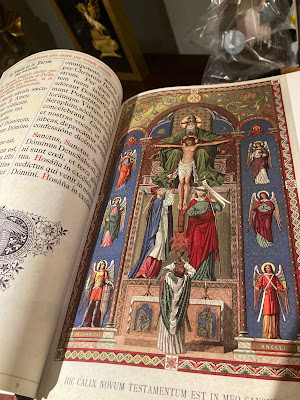