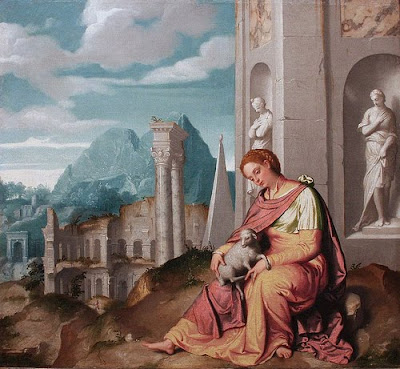 On Thursday we celebrated the Feast of St Agnes in the church of St Anthony of Padua in Headington. This is the second Traditional Sung Mass we have had there; Fr Aldo Tapparo has also said Low Mass at Christmas there (the second, dawn, Mass of Christmas).

Introit and Kyrie, sung by the Schola Abelis.

I founded the Schola Abelis, which accompanied this Mass, in part to bring the usus antiquior of the Roman Rite to parish churches where it would not otherwise be seen, especially in a Sung form. This term we are doing exactly that, both in St Anthony's and, on Feb 17th, in Our Lady of Light, Long Crendon. Two years ago we accompanied the first (of many) Sung Masses at St Birinus in Dorchester (and here); I hope that the Traditional Mass will become as established in St Anthony's as it has there.

It is hard to know what effect one-off Masses have on parishoners; generally speaking they do not attract a large turn-out. It is something for the Traditional Mass to appear in the parish newsletter: it demonstrates that it is not something completely unthinkable. For those who do attend the Mass, they see it in what for most people is its most attractive, sung form, and this experience may influence thinking in the parish more strongly than one could guess. St Anthony's has a very impressive crib scene, which you actually walk into. In accordance with tradition it stays up until Candlemas.