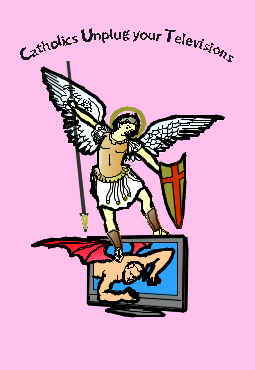 Since William Oddie's post on 'Catholics Unplug Your Televisions' (CUT) I've noticed a couple of other interesting articles on the subject of why so much programming is socially liberal, and so inimical to the Faith.

Tim Stanley, an English academic specialising in American history, is actually in Hollywood to research a book about the film industry. He has a fascinating post about the culture of the place, which, he thinks, explains the liberal tenor of its output better than any conspiracy. He writes:

No, the problem that the conservative faces isn’t intellectual, it’s social. Conservatism tends to be raw and unfiltered. In conversation, it punctures the Zen equilibrium that sustains everyone in Los Angeles. The industry works by networks and anyone who can’t sustain a long conversation about the importance of raw carrots and natural fibers to the functioning of Yin and the flowing of Yang won’t fit in. One Right-wing writer told me that following 9/11, he found work dried up. There was plenty of interest in his output (he’s deservedly famous) but when it came to small talk before pitches, or the gossip at the writers’ in LA Farm, he was immediately frozen out. “Peopl

e would open with, ‘Isn’t George Bush a moron?’ And I would say, ‘No, I voted for him.’ And I could feel I was losing their respect.”

True, this suggests that Hollywood has a leftward prejudice. But the real problem with what the writer said wasn’t the content but the act of disagreement itself. Hollywood conversations deal in hyperbolic affirmations covering for lies: “You’re amazing. That pitch was the best ever. You’re the most beautiful woman I’ve ever met. Adam Sandler is the funniest man alive!” Disagreement and contradiction are acts of verbal rape.

I find this all too credible. It explains how typical Hollywood output is not just liberal, but self-affirming pap. Something pretty similar, I would wager, is going on at the BBC.

The seriousness of the problem should not be underestimated. The characterisation and plots of TV shows and films can consistently affirm liberal attitudes without the view

er even noticing. This is discussed in the other article which has come up recently, via CFNews, a book review in The Washington Times (see it here). The book is 'Prime Time Propaganda: The True Hollywood Story of How the Left Took Over Your TV' by Ben Shapiro; it is reviewed by Jeffrey Kuhner. Kuhner writes, of this historical development of the problem:

One of the watershed programmes was All in the Family. The character of Archie Bunker symbolised the progressive caricature of Conservatives -- ignorant, racist and xenophobic. The show frequently denounced the Vietnam War and even celebrated draft dodgers as heroes. It also broke new ground in portraying the father figure, Archie, as a working-class bigot who was less enlightened than his anti-war, socially permissive son-in-law, Meathead (played by the odious leftist Rob Reiner).

'All in the Family' was first broadcast in 1971, and set the tone for the decades which followed. How often have you seen socially conservative or religious characters portrayed in a favourable light? Let me rephrase that: have you EVER seen such a character portrayed in a favourable light in a mainstream film or series? How often have you seen such characters ridiculed and outwitted? How often have such characters turned out to be hypocrites? If there is anything attractive about them, or a streak of honesty, how often have they been converted to a more relaxed, progressive, liberal approach to life? (Has the opposite ever happened?)

This is insidious a nd poisonous. There are intrinsic problems with TV as entertainment: the tendency of people simply to switch it on and watch whatever pops up, even if rather bored by it, for hours on end. What Shapiro is talking about, however, is a problem not intrinsic to the medium, but accidental: the fact that the people making so much of the programming are peddling a relentless liberal agenda. It makes it even more boring than it would be otherwise.

There are lots of good films, and from time to time there are good serie

s on TV. All of them can be seen on DVD, for hire or for sale. Vast quantities of stuff is becoming available on YouTube and Gloria TV. It is becoming possible to access films and programmes by downloading them (legally, and temporarily) from the internet for a small fee. All in all, the telly is losing its indispensibility as a window onto popular culture. Popular culture is itself increasingly fragmented: it is no longer the case that 'everyone' is watching anything in particular as it is broadcast.

All of this opens up the possibility that instead of making provision for the entire sewer to be delivered to your sitting room every day, you can be selective and choose some decent things to watch from time to time, and stop paying the TV License at the same time. Kuhner concludes his review:

Conservatives have one powerful weapon: They can flip their TV sets off. I have not watched television in years, sparing my senses - and soul - from the ubiquitous onslaught. Hollywood has declared war on Middle America. It's time we declared war on it.

So go on: Catholics: Unplug Your Televisions!