Here's yet another cruddy translation on the web: this time courtesy of EWTN. This is what Pope St Pius X (or, strictly, from the delightfully named Congregration for the Implementation of the Council of Trent, under him) said in 1905 about receiving Communion while in a state of venial sin, from the decree 'Sacra Tridentina Synodus'. (Obviously, he said you mustn't receive Communion conscious of a state of Mortal sin.) 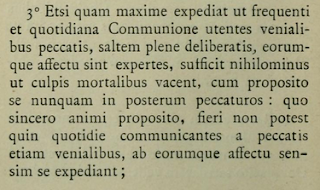 This is how EWTN's translation renders it:


3. Although it is especially fitting that those who receive Communion frequently or daily should be free from venial sins, at least from such as are fully deliberate, and from any affection thereto, nevertheless, it is sufficient that they be free from mortal sin, with the purpose of never sinning in the future; and if they have this sincere purpose, it is impossible by that daily communicants should gradually free themselves even from venial sins, and from all affection thereto. 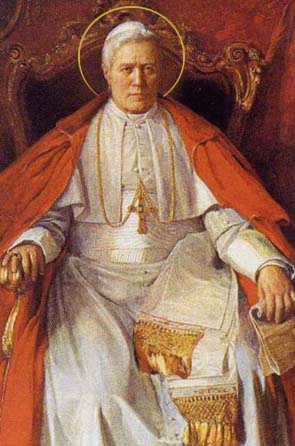 Yes, you read that correctly. The EWTN translation really, truly, leaves the 'NOT' out of the last sentence, rendering it unintelligible. On this occasion EWTN seems to be the only organisation on the web to have an English translation.

I suspect, sadly, that this is not a simple typo (although there does seem to be a proof-reading problem here), since the Latin's way of expressing the 'not' is slightly unusual. 'Fieri non potest' means 'It is impossible that it happen', and 'quotidie communicantes a peccatis ... venialibus ... se expediant' means 'daily communicants should free themselves from venial sins'. What's this 'quin' between one and the other?

My Oxford Latin Dictionary gives, among other meanings, 'it would be surprising if ... not'. What St Pius X is saying is that it is absurd to imagine that sincere daily communicants should NOT gradually free themselves from venial sin. 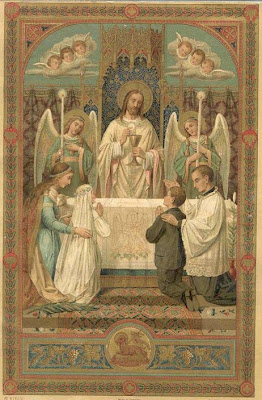 Communion is the bread of wayfarers. It sustains the Christian life. Let us not fail to take advantage of this great Sacrament of Love, and not allow scruples, if such they be, to stop us. We don't wait to be free of all venial sin before approaching Communion: Communion will help free us from venial sin.

It is interesting to note that Pius X's great achievement in encouraging frequent Communion was won not by denying the reality of Mortal Sin, or by making it easier by shortening the Eucharistic fast (from Midnight, in his day, from all food and water), but by clearing up the Jansenist-inspired confusion about when one can fruitfully receive Communion. As he says:

The poison of Jansenism, however, which, under the pretext of showing due honor and reverence to the Eucharist, had infected the minds even of good men, was by no means a thing of the past.

Thanks to him, it now is. Thanks to various things which have happened since his day, we have now gone to other extreme. But that must be the topic for another day.
Posted by Joseph Shaw at 6:29 pm