I blogged a while ago about the connection between the ‘sinner’ who anointed Jesus’ feet and wiped them with her hair, ‘Mary of Bethany’ the sister of Martha, and Mary Magdalen. The first two are identified as Mary of Magdalen by a long tradition of exegesis. 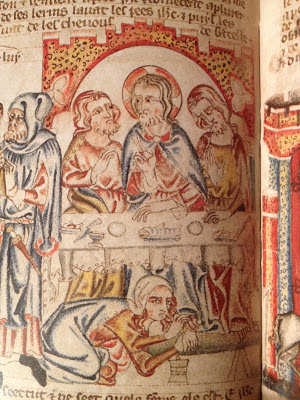 I have been looking at a reproduction of the Holkham Bible, a wonderful Medieval manuscript, not a Bible in fact but a series of pictures with a Norman French commentary. This has shed a light on these identifications which hadn’t occurred to me. For here are, from the same page, depictions of Our Lord dining with Simon the Pharisee with the 'sinner' annointing his feet, and the dinner at Bethany, with Mary and Martha: Mary sitting at His feet.

What is immediately obvious, and clearly intended by the artist, is the visual parallel between the two scenes. In both, Mary is at Our Lord's feet, which are resting on a long foot-stool. In both she is the subject of carping criticism, and in both Our Lord is defending her. These are not just parallels in how the scenes are depicted, of course, they are (apart from the footstool) in the scriptural text. 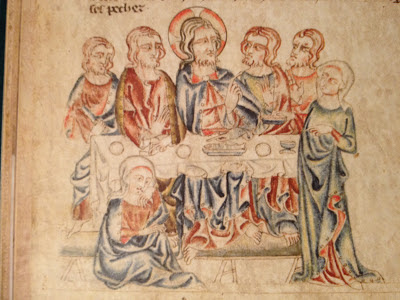 Stories echoing or contrasting with each other are in fact characteristic of the Gospels, and in itself this doesn't indicate that they two ladies at Jesus' feet are the same person. What the artist is doing with them, however, is very nice: they are 'before and after' scenes, before and after Mary Magdalen's absolution. First, we see her repentance: she comes to Jesus with a contrite heart, and Our Lord explains that her perfect contrition - sorrow motivated not by fear but by love, she 'loved much' - makes possible her forgiveness. In the next scene she is still at His feet, in a new state, a state of grace, and what she wants to do, following her conversion, is listen to Our Lord as intently as possible. And as He explains, this vocation is not to be taken away from her. From the bitterness of regret Mary is given the sweetness of contemplation, through repentance and absolution.

My reproduction of the Holkham Bible is accompanied by a translation of the text which accompanies the pictures. The commentary by the editor, Michelle Brown, priggishly remarks, about the first picture:

'A woman (here not specified as Mary Magdalen, an identification that is theologically unsound) kneels at Christ's feet...'

But she is 'specified as Mary Magdalen': the commentary in the Bible itself tells us 'la Marie magdalene entrat en le meson es se asseat a pes Ihesus et commenceat a plurer'. This is not the only passage in which Michelle Brown seems to have written her own commentary without bothering to read the commentary given in the manuscript itself. Later she muddles up the Pharisee and the repentant Publican in the parable: being influenced apparently by her assumption that outward signs like bowing down are bound to be insincere, she jumps to the false conclusion that the man depicted prostrated on the ground is the Pharisee.

However Brown clearly has her own agenda in looking at this manuscript. In this video she actually suggests that the artist was protesting about pollution. Give me strength...