The shades of the shaven men 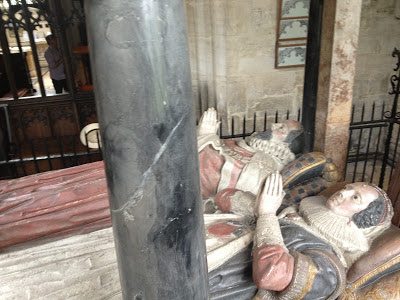 I was in Burford today, and I looked into the Medieval parish church. I was very struck by the hugely impressive tomb from the late 16th century, from a couple, Sir Lawrence Tanfield and his wife, who seem to have done pretty well out of the Reformation. Realising, I suppose, that no one was likely to pray for the repose of their souls, they built this monument to their own piety.


They lived in 'The Priory', by then not a religious institution but a very grand house, and I thought of Chesterton's lines:

'Perhaps the shades of the shaven men,
Whose spoil is in his house,
Came back at last in shining shapes
To spoil his last carouse...' 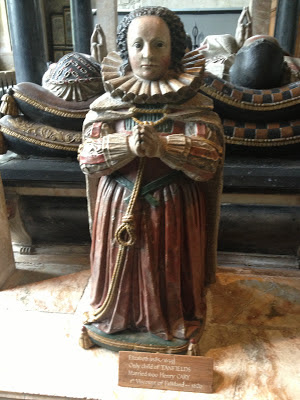 Here is their only daughter, he hands folded in prayer.

It seems, in fact, that the shaven men, the monks displaced by Tudor squires, had the last laugh after all. This young lady, Elizabeth, Viscountess Falkland, clearly a girl of remarkable spirit, who also secured a place for herself in English literature as the first known woman to write and publish a play, became a Catholic. Her four daughters all became Benedictine nuns at the English convent at Cambrai.

She has a Wikipedia page. So perhaps the smug old Tanfields got more prayers than they bargained for.

- Posted using BlogPress from my iPad
Posted by Joseph Shaw at 4:38 pm