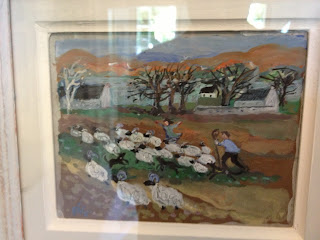 This is my annual plug for the open studio of a rather obscure artist, who happens to be my mother. If you are in London this weekend, she is having her 'Open Studio' exhibition on the Chiswick Mall from 11-6 today and tomorrow. 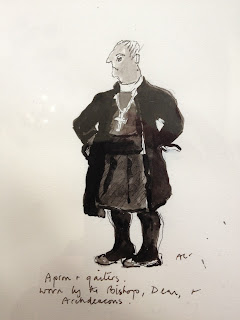 She exhibits in commercial galleries too, this is a chance to see some affordable work in a relaxed domestic setting.

This year she has also completed an edition of her mother's letters, complete with her own illustrations: 'A Vicarage in the Blitz'. Molly Rich was the wife of the Chiswick vicar (later Dean of Peterbrough Cathedral, and later still a Catholic convert, Edward Rich), and her war-time letters are a fascinating insight into that period, and also the Anglican milieu of the day. You can buy the book on Amazon (as well as from the Open Studio). 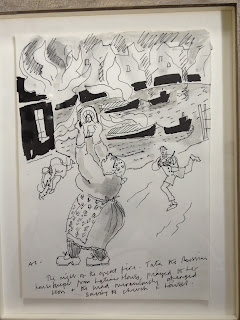 Here are a few of the pen-and-ink illustrations, which are also for sale.

The middle one depicts a dramatic scene in which the vicarage, together with the Church (St Nicholas') and the neighbouring houses, was nearly engulfed by fire, after a bomb hit a wharf on the Thames igniting barges full of wax destined for a shoe-polish factory. Molly wrote to her friend, the following day, rather laconically: 'Tata, the Volkov's Russian cook, saved the situation by bringing out her icon and praying to St Nicholas and suddenly the wind changed and blew the flames where they could do no harm.' (p51) 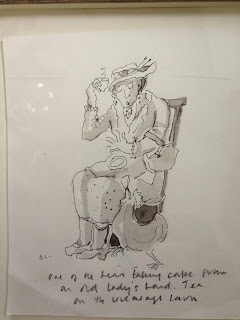 And we think we live in interesting times...

The illustration below shows the consequences of Molly's attempt to combine the war-time project of keeping hens with civilised vicarage life.

There are lots more pictures from the exhibition on the website here.