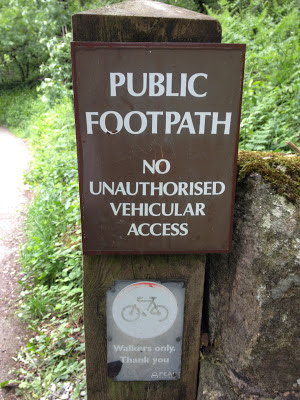 On Sunday I went on the Latin Mass Society pilgrimage to Padley Chapel in Derbyshire. It was a bit crazy to go on another all-day trip after my visit to Willsden, but I'm glad I did

The pilgrimage honours two martyr-priests of Penal times, both beatified: Bl Nicholas Garlick and Bl Robert Ludlam. The chapel was in the upper floor of the gatehouse of Padley Manor, the home of the Fitzherbert family, who were Catholics. It came back into Catholic hands, and was restored as a chapel and shrine in 1933.

Missa Cantata was celebrated by Fr Martin Clayton, a long-standing friend of the Traditional Mass and the LMS in this part of the country.

I fancy it was a bit off the beaten track in the 16th century; to get there today, you have to walk half a mile from Grindleford station.

I think that's rather cool. It is a real pilgrimage. The two priests were captured in the chapel, and soon afterwards martyred in Derby; the manor was seized also, and is now a ruin; only the gatehouse survived, where the chapel had been. The story of the martyrs is told in Padley Chapel's stained glass windows, as is the rather amazing discovery in 1934 of the original chapel's altar. The chapel had, of course, been dismantled by its new Protestant owners, who included the notorious priest-hunter and torturer Topcliffe. At some point the altar stone - not just a miniature square one for insertion into a wooden altar, but a great slab - was buried in part of the manor. It was discovered, unmistakable with its five crosses, and restored to its place in the chapel. The original site of the chapel on the upper floor is where the historic altar has been restored; the floor has mostly been cut away, however, and it is possible for Mass to be said up aloft, or on the ground floor. It can also be said under a special shelter in the ruined manor house, when there are too many pilgrims to fit into the chapel. 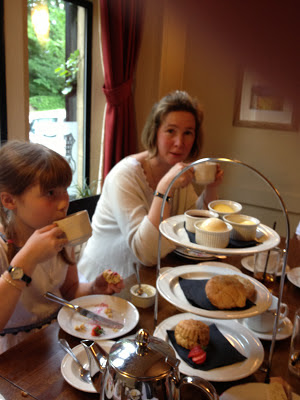 We didn't only honour the martyrs with a lovely Sung Mass, but by hanging around in the drizzle while the key to the chapel had to be fetched (some wires had got crossed, these things happen).

A minor penance which gave an edge not only to Mass, but to a rather splendid tea we had just down the road afterwards.

There are more photos here.
Posted by Joseph Shaw at 10:00 am