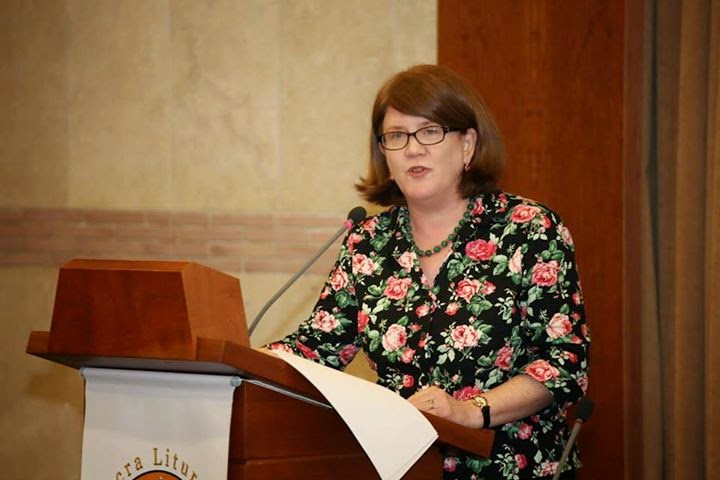 I noticed on Twitter, from people live-tweeting the Sacra Liturgia conference in Rome, that the Australian theologian Tracey Rowland was having a go at skirt-wearing traditionalists. Well, two can play at that game. Big floral prints are, in general, a risk...

She's now delivered herself of a three-point critique of those dreadful people who go to the traditional Mass (see comments by Fr Ray Blake and Fr John Abberton). They just get in the way of the Reform of the Reform, with their silly ideas and personal imperfections, moral and aesthetic. Rowland reminds me of the hospital manager who thinks his job would be easier if there were no patients.

Her three points are these.

1. When she goes to the EF, she afterwards finds herself 'surrounded by' people who pick over the liturgy like opera-buffs after an opera. They are attracted to the EF just by its beauty. She calls this 'Aestheticism'.

2. When other people go to the EF, they find themselves surrounded by people dressed as if from 'another era': so they tell her.

3. The EF is associated with a 'political' position: 'opposition' to the Second Vatican Council.

The first thing which strikes me is that the first two criticisms are pulling in different directions. What she is saying, essentially, in the first is that EF-goers are too middle class. They are educated, articulate, can detect 'buff notes', and like talking about it after Mass. The sort of people, in short, who might be friends of Tracey, and might accompany her to Mass or talk to her afterwards. Or who might turn up to a one-off special occasion Mass in a Cathedral with a special choir and so on. Perhaps this is the only kind of EF the great Professor has made it to.

In the second criticism, she is saying that EF-goers are not middle class enough. They are the sort of people who take the obligation to dress modestly more seriously than the demands of the modern fashion industry, and don't have the time, money, and perhaps fashion expertise to find the few clothes which are both 'with it' in fashion terms and still perform the function clothes once had, even in Australia, of, well, covering you up. So they end up looking a bit old-fashioned. These are not Tracy's friends: she doesn't say she's even seen these people herself, but she's heard about them from other people who like to dip into the EF occasionally as an alternative to their regular OF. So we are presumably talking about regular Masses with stable communities attached them.
Rowland's second criticism could be described as social, or moral (because those trads take morality too seriously - shame on them!), but above all it is aesthetic. Professor Rowland thinks it is wrong to criticise a professional choir for fluffing Lassus, but quite appropriate - indeed, a good thing - to criticise a Catholic mother for not having enough money to get the latest dress.

It is hard to know how Traditionalists are supposed to respond to this. When there is an opportunity to have an EF Mass in a prestigious church, perhaps a Cathedral like Sydney's which opens its doors to them after years of asking, the organisers - and I speak for myself too - tend to say: well let's make this as lovely as possible. Let's give glory to God on this special occasion, let's do something in accord with the nature of the church and reflective of our joy at this breakthrough. Let's get in a really good choir, never mind the cost, let's crack open the best vestments we can find, let's make sure the servers know what they are doing. So we do all that, and give it lots of publicity, and as well as the regulars from the EF community down the road it reaches out beyond the core vote, if you like to think in those terms, and draws in all sorts of people who think this is a good opportunity to experience the EF for once, and - who knows? - maybe like the chosen composer. And then afterwards some of these people talk about the music or the vestments or whatever and the entire movement gets tarred with the brush of 'Aestheticism', and you go back to your regular Sunday Low Mass with one server in a dark side-chapel at the crack of dawn, or a Missa Cantata in the middle of Sunday afternoon with a volunteer schola which has to struggle each week to get it right, and you think: why did I bother?
Well, Professor Rowland, let's just say that we bother not because we want to please you, but because we want to glorify God. Let Him be the judge of our efforts. If you don't like it, you can go and jump in the Pacific.

What of the last point? I was interested to see Fr Ray Blake summarise it as being about the 'politico-theological baggage', but that's not quite what she says in the video. She just calls it a 'political statement in opposition to the Second Vatican Council' (at about 2:10). 'Political' is code for 'theological position I don't like'. She is annoyed that too many people attending the EF don't agree with her take on Vatican II.

Again, this is in tension with her first point. Like the people criticised in the second point, the people she is talking about now do not just 'love the EF because it is beautiful'. It is hard to resist the idea that Rowland thinks that it would be better if they did. Their crime is to ponder the implications of the Catholic Faith which are so eloquently represented by the Traditional Liturgy, and to allow those implications to transform their lives and their thinking about a range of issues. If only, she seems to be saying, if only they were more superficially interested in the liturgy, if they just popped in and out of different kinds of Mass for a bit of 'enrichment' without thinking too hard about the theological issues this variety raises. Pope Benedict, of course, is a prime example of someone who doesn't just enjoy the variety of Masses facing the people or facing East, people kneeling for Communion or standing, and so on, but has to spoil the 'enrichment' by pointing out that there are serious theological problems with the usual OF practice, and insofar as that can be blamed on the Spirit of the Council, too bad for the Spirit of the Council.

The fact is that anyone who goes regularly to the EF has to face, sooner or later, the question of what to make of the fact that the the Second Vatican Council called for changes to this Mass, the Mass they have come to love. I've written about the different options here: the point is that there is a range of views on the subject which are perfectly compatible with fidelity to the Magisterium. One of those options, of course, is that represented by Pope Benedict's private views in his great book The Spirit of the Liturgy. Those attached to the EF have to think about it, they have to read about it and to discuss it, if they are to live as thinking Catholics and not go mad.

The only alternative to this, Professor Rowland, is called Aestheticism.
Posted by Joseph Shaw at 11:38 am