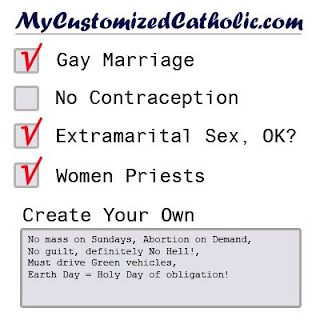 My correspondence in the Universe continues: after my last letter about Martin Elsworth's accusation of 'Cafeteria Catholicism' against the SSPX, he leveled the charge against me. Last weekend his letter said, in part:

'In rejecting [Vatican II]'s teaching on the need for reform in the liturgy, religious freedom and relations with other Churches [sic] and faiths, among other things, the Lefebvrists show themselves to be at odds with the magisterium.
...
Could Mr Shaw too really be a cafeteria Catholic, just picking and choosing what it is he wants to believe?

So, the 'need for reform in the liturgy' is a dogma of the Faith now, is it? An interesting idea. My reply:

Mr Elsworth (Letter, 17th Feb) claims, among other things, that the Second Vatican Council taught ‘the need for a reform in the liturgy’, and that since ‘traditionalists like Dr Shaw’ reject this, we are ‘dissenters’. There is a nest of confusions in this assertion.

Whether there is a need for liturgical reform is something which is going to vary from age to age, and it depends not simply on the truths of Faith entrusted to the Church by Our Lord, but on empirical observations. Vatican II’s treatment of the liturgy, in Sacrosantum Concilium (SC), outlines a limited programme of possible changes. If Mr Elsworth thinks this is a set of dogmatic truths, he presumably thinks Pope Paul VI committed heresy by permitting Mass entirely in the vernacular, when SC 32 said ‘the use of the Latin language is to be preserved’. But exactly what form the reform, if any, should take, is a matter of prudential judgement and free discussion.

By contrast, the Council of Trent solemnly anathematised condemnations of the ‘ceremonies, vestments, and outward signs’ of the (Traditional) Mass, and of the silent Canon (Session XXII, Canons 7 and 9). I hope Mr Elsworth has not chosen arbitrarily to reject this infallible teaching.

I would encourage Mr Elsworth to take that admonition to heart.
As I have argued before, liberal Catholics tends to share with Ultramontanist conservatives an inability to distinguish dogma (and 'dogmatic facts') from non-dogmatic statements in Church documents. These include, most obviously, prudential judgements and policies. Thus, when Bl. Pope John Paul II said (Evangelium Vitae 27), about the Death Penalty, that 'Modern society in fact has the means of effectively suppressing crime by rendering criminals harmless without definitively denying them the chance to reform', he was making a judgment about empirical conditions and the likely consequences of practical policies. It appears, for example, from the context of his remarks that he had Western democracies in mind. What about societies where highly dangerous prisoners can reliably bribe or fight their way to freedom? These are serious questions. The views of a Pope deserve a hearing, but they don't demand the assent of dogma.
The elision of dogmatic and prudential statements by conservative and liberal Catholics serve opposite ends, however: the conservatives want us to accept them all without distinction, the liberals want us to hold them all with equal contempt. Mr Elsworth wants to urge the charge of 'cafeteria Catholicism' against trads not because he is an ultramontanist himself, but because he thinks it a paradox that trads don't come up to the self-imposed standards of conservatives.
His own views are, in fact, rather interesting. Over the past year he has written six letters to the Catholic Herald which criticise or deny a series of practices or teachings.

In June 2012 he attacked clerical celibacy.

In August 2012 he attacked the (then, new) Bishop Gilbert of Aberdeen for the latter's critique of same-sex marriage.

In November 2012 he attacked clerical dress, and in a separate letter opposed Daphne McLeod's defence of traditional catechesis.

In January 2013 he declared that the Church as Mystical Body is 'obscured' by the 'institutional Church'.

Also in January this year, he attacked Humanae Vitae. He began his letter:

Is there not something essentially absurd about the cult of personality with which some Catholics invest the papacy, as if the Pope were a Soviet dictator whose every pronouncement has to be greeted with uncritical adulation?