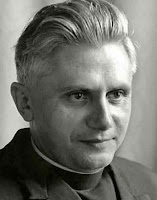 Like everyone I am in shock about the Holy Father's decision to abdicate. We have to assume that his reasons were pressing. I don't pretend to understand it, however.

We should pray for the conclave, which will be summoned by those left in charge of the empty see on the evening of 18th February. There is a Votive Mass 'Pro Eligendo Summo Pontifice': the Mass 'Suscitabo mihi'. Also recommended (by the Missal itself) for this intention is the Mass of the Holy Spirit, 'Spiritu Domini'. Say them, ask for them to be said, sing them, attend them and pray them. The prayer of the Church is the most powerful form of prayer, because it is the prayer of Christ.

Paddy Power is giving ludicrous odds for the different cardinals: what do they know about these things? But of course no one knows. I was amazed when Joseph Ratzinger was elected. And it will be too soon to despair even if the successful candidate is not to our immediate liking: the office makes the man, to a large extent. We must face the future with serenity and courage.

Perhaps Pope Benedict has done what Providence wanted him to do. By electing the man who wrote The Spirit of the Liturgy, the last Conclave made it impossible to dismiss the concerns of those critical of the liturgical reform, and those attached to the ancient liturgy. Both movements have taken off since his election, and this cannot now be undone. By saying that the ancient liturgy had never been banned, Pope Benedict made it ultimately impossible to stop priests saying it. Again, this has taken off during this reign, and the toothpaste can't be put back into the tube.

Perhaps what we need now is what we will certainly get: someone for whom the Council and the reform of the liturgy wasn't a personal experience - whether euphoric or traumatic. We need someone who can say: the Church has had many councils, Vatican II, Lateran IV, Nicea I and all the rest must be read together, understood together and obeyed together. In the 21st Century we need to bear in mind the oddly prophetic words of Pope Paul VI in Evangelii nuntiandi (1975):