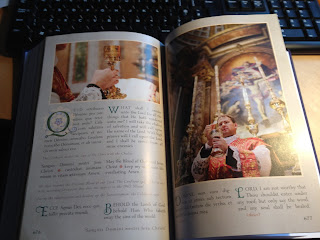 I have received my copy of the 'St Edmund Campion Missal and Hymnal for the Traditional Mass' published by Corpus Christi Watershed. I had ordered it in advance. It is a remarkable volume, very ambitious, but with faults along with its good points.

First the pros, then the cons.

Pros: First off, it is amazingly inexpensive. I was stunned. At $22.99 it is only slightly more than one third of the price of the Angelus Press Missal ($65.95); the US price of the Baronius Missal is close to the Angelus Press one ($59.95). (Baronius Press in the UK sell theirs for £39.95.) Now I have it in my hands, I can say this is not a cheap knock-off by any means, being full colour throughout, on good quality paper.

It has two versions of the Ordinary of the Mass, one for Solemn and one for Low Mass, which I think is unique. Each of them is illustrated with photographs of the Mass as it proceeds, one per page. The one for Solemn Mass includes all the ceremonies unique to Solemn Mass. This is brilliant: clear, attractive, intuitive. The photographs themselves are extremely good - as an amateur photographer of the liturgy I am very, very impressed. They use excellent angles, imaginative use of selective focus, they are all pin-sharp and perfect. No corners were cut here. They were taken in the lovely FSSP church in Rome, Sta Trinita.

There are some nice photos of medieval manuscripts showing the text of the Mass. I must say, however, I'm not really sure why they are there. They aren't something you are going to be using, in the way you use the other things in a missal.

Another pro is that it has a lot of chant in it. But then it has so much chant, this rather turns into a con: for it contains all 18 Kyries and all 6 Credos, plus a large number of vernacular hymns, many with the music, which take up the second half of the book. As someone who sings a chant kyrie twice most weeks, I've never sung half of these, nor half of the Credos: they simply aren't needed for the ordinary Mass-goer. As for the vernacular hymns, whatever the editors may imagine these simply aren't sung at Mass in most places, and where they are sung, at Mass or outside it, hymn books are invariably provided. What is the point of having an inevitably limited selection of hymns in the back of your missal when on the occasions they'll be needed, you'll be given another copy? Unless everyone in the congregation has a copy of this book, no one is going to announce 'Love Divine All Loves Excelling is number 943 in your Campion Missals'. Looking the thing up in the index before locating it is guaranteed to make you miss the first verse. And you may find the rest of the congregation singing it to a different tune to the one printed in your missal, too. These are the reasons, if you think about it, why hymn books have traditionally always been owned by churches and handed out, and not bought by the laity: it doesn't matter if we all have different missals, but it does matter if we have different hymnals. 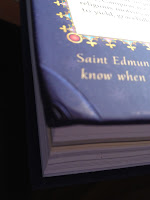 Other cons: as per my photograph, the paper is gloss. Not a good idea under bright lights the reader can't control. The Latin Mass Society's move from gloss to matt paper for the Mass of Ages was greeted with great relief, especially by our older readers. You can get good photographic results with the right kind of matt.

The hard-back covers are not suitable for the kind of wear-and-tear books get in church. My copy already has a bruised corner from the shipping. There's a reason why hand missals traditionally have flexible leather (or leatherette) covers. (The ideal of course is the zipped cover: I have one on my Baronius Press hand-missal, the CTS sells them separately.)

There is no reading ribbon: very surprising in such a lavish book, where you need to flip between the Ordinary and the Propers ten times or so per Mass.

The contents page says it follows the Sundays in the first half. But this is not entirely true. The truth, dear reader, is that it only includes major feasts. Nor are there any Commons or Votive Masses. So this missal will not help you at the vast majority of week-day Masses. (A tiny clue: there are no Masses between the Most Precious Blood on July 1st and the Transfiguration on August 6th.)

This is what makes the inclusion of all that music really incomprehensible. To include it, they have sacrificed the Propers of most days of the year. Yes, I know that not many people go to daily Mass, but a lot go to Mass on odd days when they get the chance, and those are the days when you really need a Missal, because it is much less likely anyone will have put out sheets for you with the propers on. Indeed, you hardly need a Missal for Sundays and Holy Days, you'll almost always be offered a missallette with the Ordinary and a sheet printed off from Una Voce Orange County with the propers.

So, nice though it is, I don't think this Missal will displace the Baronius Press or Angelus Press missals as the market leaders. For UK reader I have to recommend the Baronius Press one, as it has the local feasts of England and Wales and of Scotland. If you want a Sunday-and-big-feast-only missal, you can buy genuinely pocket-sized missals: the one on the left is available from Cenacle Books for £12.50.

I think the Campion Missal really makes the grade, not as a pew-missal, but as a reference book. It will be a great resource for teaching children (or adults, come to that) about the Mass, and then all the features, including the music in the back, come into their own.

So thank you, folks at Corpus Christi Watershed. I'm not sure what exactly you thought you were producing, but this is a splendid book which will give me and my family years of use. I'm just not going to take it to church.
Posted by Joseph Shaw at 11:00 am