The Church's calendar and popular culture 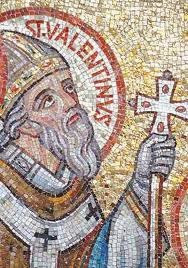 Yesterday was St Valentine's Day. That is what a thousand shop windows, restaurant menus, and service station card racks proclaimed. St Valentine was a martyr of the 3rd Century, over whose tomb a basilica was built when the Church's time of persecution was over. I attended Mass in his honour, and in the name of the Church the celebrant implored God's mercy in light of St Valentine's merits.

Collect:
Grant, we beseech Thee, O almighty God, that we, who celebrate the heavenly birthday [ie, death] of blessed Valentine, Thy Martyr, may by intercession be delivered from all the evils that threaten us. Through our Lord...


Secret:
We beseech Thee, O Lord, graciously receive the gifts we offer Thee: and may they, in view of the merits of Thy blessed Martyr Valentine, be of help to us towards our salvation. Through our Lord...

Postcommunion:
O Lord, may this heavenly Mystery be to us the renewal of of soul and body, that by the intercession of the blessed Valentine, Thy Martyr, we may feel the influence of this Sacrifice. Through our Lord...

This, of course, was Mass in the Extraordinary Form. In the Ordinary Form we don't find mentions of Sacrifice scattered through the proper prayers. Or the merits of the saints. Or their intercession. Nor is it made as clear as this that the gifts we offer God in Mass are not the unconsecrated bread and wine, but the Body and Blood of Christ by which are saved. And then again, in the Ordinary Form St Valentine is not celebrated on his historic feast day, the day of his death all those centuries ago.

It is hard to find anyone (at least, on Twitter) willing to defend the decision to take away the liturgical celebration of the saint who has, however unwillingly, given his name to the secular phenomenon of Valentine's Day. But by chance I read something which suggests that it may not be just a coincidence, that in their clear-out of the saints of ancient Rome from the calendar (where they used to be heavily represented: this is, after all, the Roman Rite we are talking about), the reformers turfed out someone with the cultural significance of St Valentine.

It was Bugnini, talking about Ash Wednesday. It is inconvenient to have it on a Wednesday, he thought; much better on a Sunday. This is impossible, however: you can't have a penitential liturgy on a Sunday. So he had to leave it on Wednesday after all. (A close shave for another ancient tradition!) But he wanted to allow the imposition of Ashes to take place any day between Ash Wednesday and the following Monday. Having it on the Wednesday, you see (The Reform of the Liturgy, p307, n7)

'had the drawback of keeping the association with Mardi Gras.'

Come again? The association with Mardi Gras is a drawback? The fact that calendar and the practice of penance has become so deeply embedded in popular culture that it is impossible to avoid it, in many cultures: this is a bad thing?

A third example occurs to me: Halloween, the Eve of All Hallows (All Saints). When All Saints falls on a Saturday or a Monday, the bishops of England and Wales, in their wisdom, move it to Sunday. This means that, except in the Extraordinary Form, Halloween is not followed by All Saints. Either it is separated from it by a day, or it falls on the same day. This horrible clash happened in 2010. But perhaps the bishops, when this decision was made (many years ago), didn't actually want to make the connection with Halloween.

What is going on here? It is true that in each case, the secular celebrations have taken a problematic turn. In the case of Mari Gras, this has been the case for many centuries. They have become unCatholic, to say the least. The response of Bugnini and those who think like him seems to be that we should retreat into a bunker, at this point, stick our fingers in our ears and pretend that they are not happening, or at least have nothing to do with us. The Church, they seem to think, should disown them. This kind of response is regularly made by puritanical types in relation to the secular celebration of Christmas: we should eschew Christmas trees and Father Christmas and presents and having fun, and pretend this has nothing to do with the Birth of the Saviour. 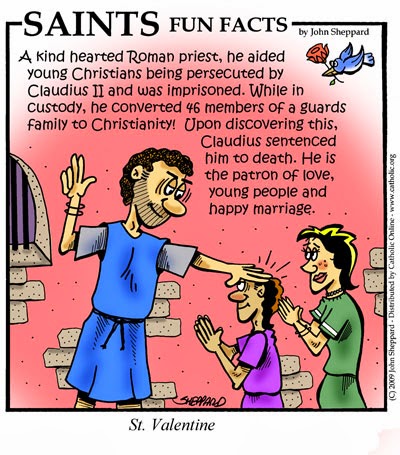 The spirit of the New Evangelisation, however, takes the opposite view. These are opportunities to evangelise. We Catholic invented all these things, or (in the case of the Christmas tree and Father Christmas), have long made them our own. Even the worst aspects, the occult references in some places in Halloween, for example, are a sort of shadow of the Catholic teaching, and can give us the opportunity to talk about it. We don't need to approve of fornication on St Valentine's Day, or getting drunk on Mardi Gras, but rather than ignoring these things, we should engage with them. That is what Pope Francis was doing by giving special blessings to engaged couples on the ... feast of SS Cyril and Methodius, yesterday. (Funnily enough, the Vatican News Service called it the Feast of St Valentine. Those trads must be infiltrating...)

The liturgical reform is usually characterised as optimistic, open to 'secular values', and in some ways it is. I think, however, that deep down there was a lot of timidity, of fear, a feeling that the Church has lost control of popular culture and needs to return to the catacombs, where the chosen few can 'participate', and outsiders can be made to feel as though they have stumbled into an intimate gathering of chums. This attitude doesn't get us anywhere. We have to go out there and make use of whatever vestiges of Christianity we can find. Even those embedded in cultural artefacts with origins in anti-Catholic polemic can be useful, like cult of the anti-hero Guy Fawkes.

Soon, after all, there will be precious little in the way of Catholic institutions to shelter us.
Posted by Joseph Shaw at 10:00 am