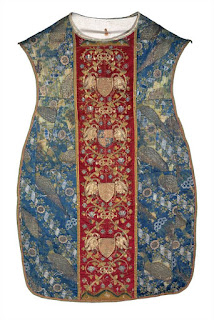 The exhibition Opus Anglicanum in the Victoria and Albert Museum in London is about to close: it does so on 5th. Right now the exhibition webpage is still up so you can see a few things about it. We went to see it before Christmas, and I thought I'd put up some random observations.

The exhibition shows off the work of Medieval English needlecraft, which was famous in its own day. This is embroidery used on a lavish scale, not simply to decorate an orphery but to cover entire chasubles, the vast copes they used in that period, and all sorts of other things.  It is a tradition dating back to before the Norman Conquest: the Bayeaux Tapestry was made by English needleworkers. However, most of the surviving examples, in this exhibition, are from the 14-16th centuries. English work was so prized that these pieces made good diplomatic gifts, which is the reason that several of the things in the exhibition have survived, in cathedrals in continental Europe. Liturgical vestments covered in pictures of virgin martyrs could have a short life-expectancy in Protestant England.

Something which did survive in England was a truly wonderful coffin-cover made for, and still owned by, the The Worshipful Company of Fishmongers, complete with mermaids. The survival of these curious medieval institutions, and their innate conservatism, is one of the fun things about England.

The practice of English embroidery was saved from extinction by (what became) the Royal College of Needlework, founded in 1872: we owe the Victorians a lot. What they do, the kind of stuff you see above all on state occasions and in well-resourced Anglican cathedrals, is a direct descendant of this medieval work. What is interesting, however, is that the medieval artists used a very limited number of techniques. The great majority of the embroidery is one kind of stitch, called 'split stitch'. Another type, 'tent stitch', was used for heraldic embroidery, which was less fine and designed for hard use; it makes sense to create blocks of colour. 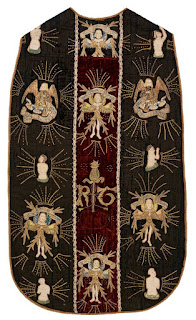 This split-stitch embroidery is very similar to modern 'silk shading', which you'll see today, for example, for faces on vestments; but the thread used was far coarser. The result is a wooly, rather than a silky, effect, which would I suppose have been more hard-wearing and also much faster to execute. Like silk shading, it can shade seemlessly from one colour into another, with texture being created by the direction of the stitches. So the cheeks of a female saint, for example would shade into a deeper pink in the middle, with the impression of roundness being given by a pattern of stitches in concentric circles.

The skill of the artisans must have been immense, and the value of their work enormous. To have a cope covered with more than a dozen saints and associated symbols and decoration can't have been any cheaper than covering it in semi-precious stones, and it was valued accordingly. Indeed, among the sumptory laws of the period, intended to restrain extravagance, embroidery on clothing was restricted to people of a certain income and social standing. 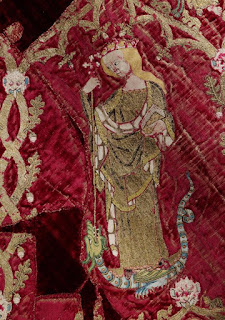 I noted some time ago on this blog something else about this exhibition which is interesting. Before it opened The Guardian carried a story about it, noting
'for the first time in decades, the museum has dared to use Latin in an exhibition title.' 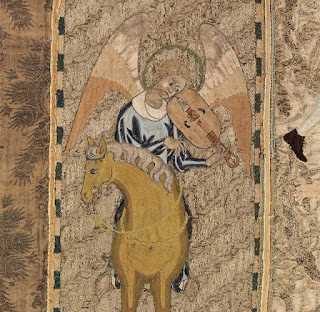 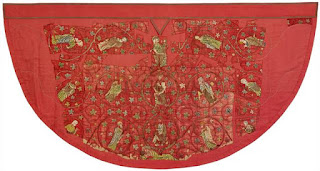 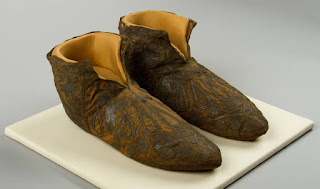 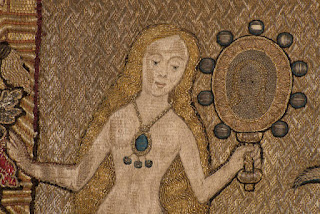 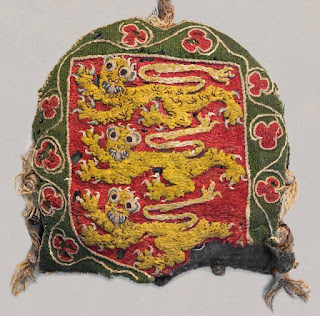 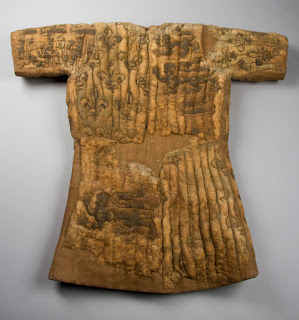 Support the work of the LMS by becoming an 'Anniversary Supporter'.
Posted by Joseph Shaw at 11:12 am